Leeds Half Marathon: The day in Tweets

Thousands of people streets to cheer on the runners who took part in the Leeds Half Marathon today.

The 32nd annual race saw almost 9,000 people running to raise hundreds of thousands of pounds for a string of charities.

Runners started in the Headrow on the route which included Burley, aKirkstall Road, past the Abbey and Hawksworth Wood. 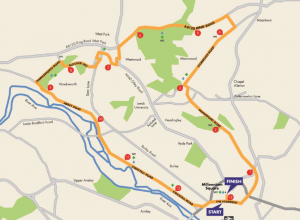 Runners from Pudsey Pacers, Farsley Flyers and Kirkstall Harriers among others took part in the race.

Good luck to everyone racing today and all the flyers taking part in the Leeds Half marathon!

Here’s reaction from the race via social networking site Twitter: