Kirkstall Road: Have your say on housing plans for former City Reach site 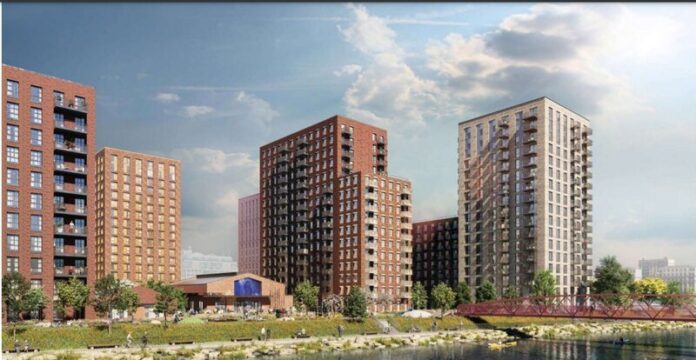 Developers have relaunched a public consultation over £200 million plans for a major mixed development off Kirkstall Road.

A new masterplan looks to provide around 1,437 new homes and 362 student rooms, located across 11 buildings at the former Yorkshire Chemicals site between the River Aire and Kirkstall Road.

The homes would sit alongside a new ‘extensive’ riverside park, play space, public square, a bridge and workspaces.

The consultation first launched last May and developers Clarion are re-launching to share some of the feedback received – and highlight changes to the proposals.

The consultation – which runs until 28th February 2022 – can be found here.

Latimer, the development arm of Clarion Housing Group, bought the 13-acre brownfield site, which was formerly known as City Reach, in August 2020.

The site has existing planning permission for more than 1,000 homes alongside student accommodation, but Latimer has carried out a redesign to deliver a residential-led mixed-use scheme.

In September, WLD reported how Leeds City Council planning chiefs said they were pleased with early blueprints to build the 11-building complex of almost 1,800 homes. Some reservations were expressed about the uniformity of the designs.

A full planning application is expected to be submitted to Leeds City Council in Spring.

Developers hope the plans could lead to further regeneration in the Kirkstall Road area, which was hit by floods when the River Aire broke its banks on Boxing Day 2015.