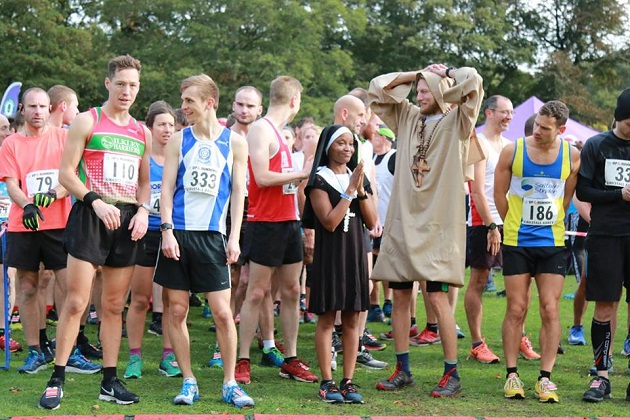 The men’s race was won by James Saxton from Wakefield District Harriers and AC in a time of 37 minutes 56 seconds, followed by Nathan Edmondson from Ilkley Harriers in second place and Simon Courtney from Stadium Runners in third.

In the ladies’ race Aisling Wall from Horsforth Harriers was first home in a time of 45 minutes 11 seconds, followed by Jen Whiteman from Chapel Allerton Runners in second and Ashleigh Greenwood from Stadium Runners in third.

West Leeds running clubs were well represented in the race with plenty of representation from Bramley Breezers, Farsley Flyers and Pudsey Pacers, with host club Kirkstall Harriers very ably looking after proceedings around the course and at the start and finish.

There was an added sense of fun as runners were invited to try and beat the Monk and the Nun, with Johnathon Young and Shamiso Sismayi taking up the roles respectively.

There were 53 participants in the junior race, with Freddie Roden from Abbey Runners winning for the boys and Jessica Baxter fro Leeds City winning for the girls. And 40 kids took part in the Mad Monk Meander around the Abbey grounds too.

The photos in this article are courtesy of Philip Bland and Shevonne McLarnon.