Street lights on Grade II Listed Kirkstall Bridge will be replaced by new LED ones if a planning application proves successful.

Leeds City Council has applied to replace the existing street lamps on the protected bridge, which was built by Leeds Corporation and first opened to traffic in June 1912. 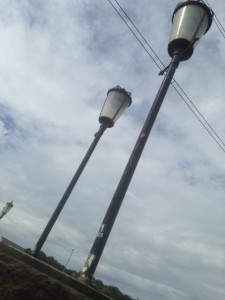 A design statement which forms part of the application says much of the work will be carried out by workmen using an ‘Underbridge Mobile Elevated Platform’. It says:

“As part of the Leeds City Council Street Lighting PFI, there is a requirement to replace a number of existing lighting and install a number of new units on the bridge over the River Aire at Bridge Road, Kirkstall.

“The new units will consist of a column mounted lantern, the fixing points are to be a chemical anchor system for the lighting units and small woodscrew/rawl plugs for the cabling andconnection box.
“…[the] decorative style lantern … has been selected both for its appearance and lighting source, which will reduce maintenance visits. The colour of the column and lantern is to be agreed and is to match the bridge colour as close as possible.
“The majority of the cable network will be run under the bridge and as sympathetically as possible against the stonework using the seams to support the cable.”

Council bosses say as most of the work will be carried out via underbridge platforms, road closures should not be necessary. It’s understood work would be carried out later this year.
Street lamps are believed to have been first installed on Kirkstall Bridge some time in the 1950s.
More details on the application can be found here. Any comments or objections should be sent to the council by September 11.
Facebook
Twitter
Pinterest
WhatsApp
Previous articleCome and join us at the Dispatch community news cafe!
Next articleMeet Ruksar, Seagull’s wonderful colourblind paint mixer