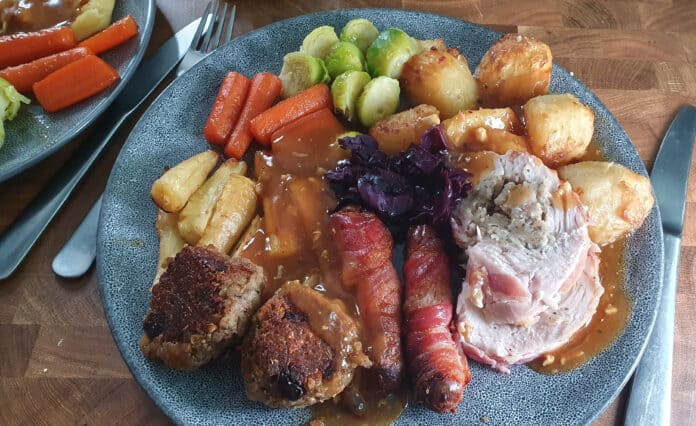 Most of us are feeling the pinch this year with rampant inflation, constantly rising food prices and almost unaffordable energy costs.

On top of this the avian flu outbreak means that fresh poultry is likely to be in short supply and prices of frozen birds are higher than previously.

We have been exploring ways to produce a decent Christmas meal on a budget and managed to create a turkey-based feast for four for only £2.50 a head. We shopped at Aldi and Tesco in Bramley and also checked out prices at Lidl in Stanningley.

The key thing you’ll want to do when shopping for your Christmas dinner is decide what your deal-breakers are. Do you insist on turkey, or would you be happy with a chicken or some other meat? Is it not a festive feast without sprouts or roast parsnips? And do you crave Yorkshire puddings with the meal or not?

We based our dinner on a turkey breast roll wrapped in bacon and stuffed with sage and onion. We bought it from Aldi and at 800 grams it was easily enough to feed four. Tesco had a similar product but we didn’t see anything like it in Lidl. To go with it, all the trimmings – homemade pigs in blankets, roast potatoes, stuffing balls, roast parsnips, glazed carrots, Brussels sprouts, red cabbage and turkey gravy. And a dollop of cranberry sauce.

CHRISTMAS DEALS
Major supermarket chains are trying to outdo each other with cheap deals priced at around £25, but Sainsbury’s is offering a £4 a head package that includes a whole turkey. And Sainsbury’s, Lidl and Aldi will all be selling packs of seasonal veg for an amazing 19p in the week before Christmas. Expect other chains to follow suit.

HOW WE COSTED IT
We noted the price we paid for each item and then calculated the cost of what we actually used. For example, we bought 2.5 kilos of potatoes, but used less than a third of that so we entered 50p in the ‘4 portions’ column.

The elephant in the room, of course, is the cost of energy. It’s impossible to calculate this because households are on different tariffs, but we’ve tried to make it as economical as possible.

Cooking two portions, we were able to use an airfryer oven, but if you are doing more then the use of your main oven is fully justified. Note that the frozen turkey roll needs two hours to cook from frozen, but only one hour if you defrost it first – leave it in the fridge for 24-36 hours to do this. We pre-cooked the potatoes, parsnips and carrots in a steamer.

HOW WE COOKED IT
All of this preparation can be done a day ahead if you like. Following the manufacturer’s instructions, make up the packet of stuffing. Allow it to cool then form it into golf ball sized balls.

Make your pigs in blankets. Allow two per person and roll a rasher of streaky bacon around a chipolata. Peel potatoes and cut into bite-sized pieces. Top and tail and peel small carrots and cut into batons. Do the same with the parsnips. Wash the sprouts, remove outer leaves and trim the stem at the bottom. If they are large, cut them in half or quarters. Shred the red cabbage. Keep all of your prepared vegetables in bowls of cold water until needed.

Let them carry on cooking until tender about 15 minutes altogether. When they are cooked, drain them and give them a good shake in a colander to roughen up the edges. Meanwhile if you have a fan oven or are using an airfryer, heat it to 180°C (356°F). A conventional oven should be 200°C (392°F), or gas mark 6.

Follow the maker’s instructions for your turkey roll. Ours was in a foil tub – you simply peel off the film seal on top and put it in the oven. Set it initially for 25 minutes. Place a small roasting tin in the oven as well. It needs to be big enough to hold the potatoes.

Put a teaspoon or two of fat in it – we want this to be hot before adding the spuds. Ideally you should use goose fat or duck fat but don’t worry if you don’t have these, sunflower oil will work just fine. We actually used beef dripping. 15 minutes after the turkey went in, remove the tin and add the pre-cooked potatoes.

Stir them in the oil to get them coated, sprinkle with coarse sea salt and roast them for 45 minutes, turning occasionally. When the initial 25 minutes is up, place the parsnips and stuffing balls on a solid shelf – you may need to spray them with oil, but if you can arrange the pigs in blankets on a wire rack above them then the melting bacon fat may be enough to lubricate them. Continue roasting everything for 30 minutes.

For the red cabbage melt 2 tablespoons of brown sugar into 1 tablespoon of balsamic vinegar (or red wine vinegar) in a large frying pan. Add half a cup of water and then the shredded cabbage. Bring to the boil then turn down to a simmer and let the cabbage cook with a lid on for about 20 minutes. After this time remove the lid, check the sweet/sour balance and add more or sugar or vinegar if necessary. Let the liquid evaporate until the cabbage is fairly dry. Set aside until needed.

To make the glazed carrots, place them in a small saucepan and add just enough water to come halfway up them. Melt in two tablespoons of sugar or honey if you have any. Stir the carrots to get them well coated and bring it to the boil. Remember the carrots are cooked already so we just need the liquid to more or less evaporate, leaving a sweet sticky glaze on the carrots. To do this without turning the glaze into burnt toffee, you will need to keep a careful eye on the pan and keep stirring.

Brussels sprouts should be cooked in boiling salted water for no more than five minutes. You can re-use the water that the potatoes were cooked in if you want to be super-economical. This way they retain their green colour and a bit of crunch, and don’t turn into the nasty grey sulphurous mush that many people hate. It turns out the old thing about cutting a cross in the bottoms is a complete waste of time that just helps the sprout become more watery. So don’t do that.

We like to make real gravy from the meat drippings but with this turkey roll there really won’t be any, so we bought a jar of own-brand turkey gravy granules. Simply follow the instructions on the jar.

NO STARTER?
We generally avoid having a starter with the Christmas dinner on the basis that we’ve been nibbling things all day and it would spoil our appetite. But if you do want a starter, make it light – a simple salad or a retro prawn cocktail if you can find some cheap frozen prawns.

WHAT ABOUT THE PUD?
For pudding, if you have room, we can recommend Aldi’s Holly Lane Christmas Pudding – a 400 gram one will feed four and costs £1.85. Add a bit of instant custard and you’ve got a luscious dessert for about 50p a head.

AND THAT’S IT
Making Christmas dinner is always a challenge, but we hope these tips will help:

Best of luck, and Merry Christmas!

Keef Williamson is a community reporter with West Leeds Dispatch and runs a YouTube cooking channel called KeefCooks. He has made a video of how to make this budget Christmas dinner – it features a lot more detail and quite a few laughs.