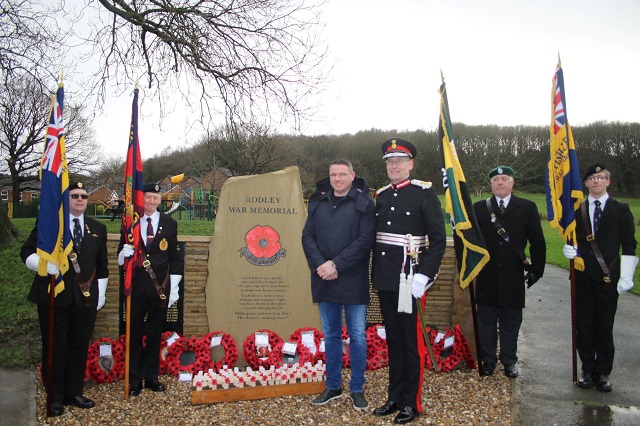 Hundreds of local people attended the service which was conducted by Reverend Canon Paul Tudge (St. John’s, Farsley) on a very cold and wintry day in Rodley, writes Martin Heaton.

The service started with a Military Parade into the park, led by Royal British Legion Standard Bearers and accompanied by military association representatives.

The unveiling speech was presented by the Lord- Lieutenant of West Yorkshire.

He spoke of the 58 Rodley ‘Fallen’ from the WW1 and WW2 campaigns who are honoured on the memorial.

Details of the community project, from its initiation, design and installation was presented by local resident Stephen Nicholls.

Special recognition was given to Allan Howard (landlord of The Crown & Anchor, Rodley) and Jordan Bray (who until recently was Manager of Rodley Social Club), for their fantastic efforts to galvanise the community with various fundraising initiatives to raise the required funds.

Councillor Caroline Gruen (Lab, Bramley & Stanningley) spoke of the community spirit which enabled this project to become a reality.

A special thanks was given to the staff and pupils of Valley View Community Primary who raised almost £2,000 towards the cost of the war memorial.

They were the nominated choir for this auspicious event, with around 20 children attending the service.

There were 28 local organisations and companies who participated with the wreath laying ceremony.

John Barker, archivist for Rodley War Memorial, presented biographies of a number of the Fallen who are honoured on the memorial

The War Memorial has received very positive comments from residents within the locality since the unveiling.