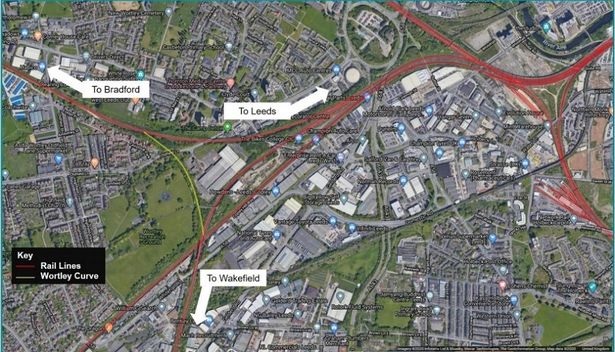 Reinstating a half-mile stretch of track named the Wortley Curve could massively boost rail travel into and out of Bradford.

It was closed in 1985, much to the annoyance of Bradford politicians, and nature has since taken over much of the route.

But a new funding bid could see the site, next to Wortley Recreation Ground, re-opened, meaning Bradford rail services would be much less reliant on Leeds.

A re-opened Wortley Curve would allow trains to travel from Bradford to Wakefield and beyond without having to pass through Leeds Station.

And it could also link Bradford up to planned High Speed 2 rail services that will link London and Leeds.

At a meeting of West Yorkshire Combined Authority’s Transport Committee next Friday members will discuss a number of transport and infrastructure projects across the region.

A report to the committee, which is meeting remotely, discusses the Restoring Your Railway Fund announced by the government in February as a way of supporting different projects to reinstate axed local services and restore closed stations.

One part of this is the Ideas Fund – which could include closed stations, the upgrade of current freight lines to include passenger services and restoring disused rail alignment.

Applications can be made for each proposal and each scheme needs the backing of an MP. Leeds West MP Rachel Reeves has supported the Wortley Curve proposal.

And a report to the Transport Committee says the Combined Authority has also supported that the Wortley Curve be submitted as a potential scheme, although it will face competition from a number of other projects.

Touting the benefits of the Wortley Curve re-instatement, the report says says there are transport markets between Bradford and Wakefield, Sheffield and the East Midlands that the railway system is “not currently serving well.”

The report to the committee says:

“The proposal of Wortley Curve has emerged from the Combined Authority’s Rail Connectivity Vision work.

“The work identifies that there are sizeable travel markets between Bradford, Calderdale and Kirklees to places such as Wakefield, Sheffield and the East Midlands, that the railway is not currently serving well.

“It identifies opportunities for infrastructure enhancement which could improve the integration of Northern Powerhouse Rail and HS2 with the existing rail network.

“These include the reinstatement of Wortley Curve and an enhanced Clayton junction as part of the HS2 development.

“If the Wortley Curve could be reinstated as part of a wider package, it could potentially enable faster, direct journeys between Bradford/Calderdale/Kirklees and Wakefield/Sheffield/the East Midlands without having to reverse at Leeds station.”