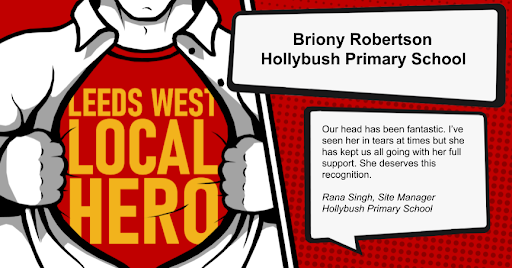 Leeds West MP Rachel Reeves has launched an initiative to recognise and celebrate local people who have gone the extra mile during these past few months, writes Jo Fiddes.

“I was contacted by the site manager of Hollybush Primary School who asked if I could tweet about the head teacher to recognise all the work she is doing,” said Ms Reeves

“That brought to mind all the articles I have been reading and sharing about people in Leeds West who have used this opportunity to reach out and support others.

“From sponsored head shaves to children’s book giveaways, food parcel deliveries to befriending schemes. There has been so much going on – I’m really proud to represent such a generous community and I wanted to mark it in some way.”

Ms Reeves decided to launch the West Leeds Local Hero Award. The first recipient is the head teacher of Hollybush Primary, Briony Robertson, who was the inspiration for the award for her incredible work during lockdown.

“Our head has been fantastic. I’ve seen her in tears at times but she has kept us all going with her full support.”

“We launched this appeal on Facebook only a few days ago and asked people to spread the word to friends and family.

“We have already had several nominations but are open to more suggestions. If you know a local hero you think deserves a shout out, please contact my office on rachel.reeves.mp@parliament.uk and let us know why you think they deserve this recognition.”