The latest fundaising effort to support Wortley mum Helen Thompson is being held later this month. Helen has a rare form of cancer and decided to split the money raised between the Bexley Wing of St James’ Hospital, where she is having her treatment, and the rest equally between her two daughters in a trust fund. Her friend Jo Gittins writes on the latest event… 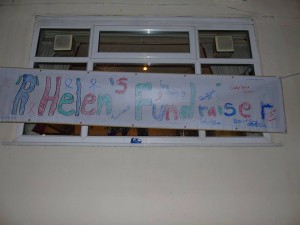 Join us on Monday, 28th December, for a ‘glow in the dark twilight sponsored walk’ in aid of Helen’s fund.

Meet at the Wortley Brick pub, 5pm on 28th December.

The route will take us around the reservoir. It’s relatively flat so suitable for all levels of fitness and more importantly local so if you have had enough just make your way back to the Brick.

Those who want a longer walk just keep on going round as long as you can.

‘R’ Helen’s Fund is a series of fundraising campaigns and events in the name of and in support for our beautiful sister and friend, Helen Thompson.

Helen is a fighter and won’t be giving in to this horrible disease. She started her fight against this disease on 12th October 2015 with chemotherapy as radiotherapy is not an option at this late stage. Her treatment is hard going and Helen has been admitted in to hospital numerous times.

Just like many people in West Leeds, Helen never though this could happen to her and therefore was not prepared. She has two children and lives in council-owned housing with no financial legacy for her children.

Her family and friends have made a commitment to raise funds in aid of providing some financial help for this family.

All money raised will be split and placed in a trust fund for her two girls, Lucy and Hannah, with a donation to the Bexley Wing at St James’s Hospital.

A fundraiser held at The Brick last month raised around £3,000.

53.7933777-1.6175652
Facebook
Twitter
Pinterest
WhatsApp
Previous articleWest Leeds: Volunteering helps me as well as my charity
Next articleWest Leeds High School: Do you remember your former masters?