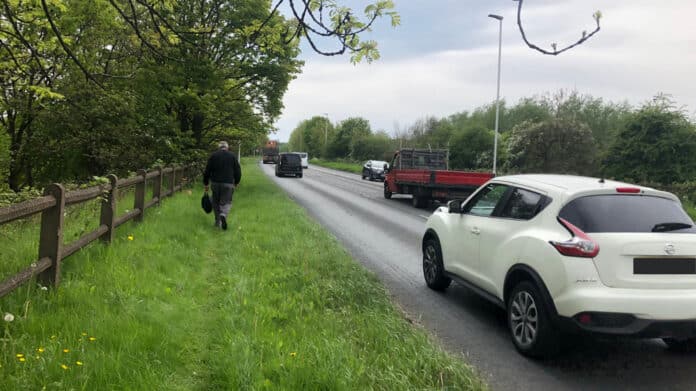 West Leeds residents can have their say on proposals for new pathways and a footbridge over the A6120 Outer Ring Road to link Calverley and Farsley.

The first phase, which will see work starting later this year, includes measures at Horsforth Roundabout and Fink Hill junctions, as well as a cycle route to Rodley roundabout.

The next proposed package of measures would include;

The scheme will also propose a speed limit reduction to 50mph starting from A6120 Horsforth roundabout and finishing at A647 Bramley Town End, which could be enforced by either fixed or average speed cameras.

The council says between 2014 to 2018 there were ten serious and 70 small collisions reported in the area showing a need to improve safety on the route.

Connecting Leeds, the council’s transport division, expect the proposals to lead to; increased walking and cycling levels within West Leeds, especially for short journeys and, as a result, fewer emissions from transport; improved safety for all road users; and reduced journey times for all vehicles using the Outer Ring Road, especially buses.

“Phase two of the Connecting West Leeds proposals will help to better link communities in the area while providing a more attractive and safer route for walking and cycling.

“The plans help us to achieve our transport strategy targets of increasing cycling by 400%, walking by 33% and reducing car usage by 30% to meet our pledge of becoming carbon neutral by 2030.

“The safety proposals seek to reduce the number of collisions along this route, helping to meet our Leeds Safer Roads Vision Zero 2040 strategy which aims to eliminate deaths and serious injuries on Leeds roads by 2040.

“It’s important that residents, businesses and whomever uses this route has their say on our proposals before we progress.”

Residents and businesses are being consulted on the proposals until Sunday, 11 September 2022, and can have their say online by visiting this link or attending one of our drop-in events:

The latest plans follow on from a consultation on Connecting West Leeds phase one, which was carried out in November and December 2021.

Phase one works will start on site in summer and autumn 2022.

Funding for both phases have been approved by the Department for Transport. £20m of this will be funded by the Government’s Levelling Up Fund – a £4.8 billion pot that will support town centre and high street regeneration, local transport projects, and cultural and heritage assets across the UK – and £3.257m will be funded by the West Yorkshire Combined Authority.

Update: This article was amended at 6.21pm on Tuesday, 12 July to clarify that the Farsley venue is Farsley Community Church Hall, not St John’s as originally stated in the council’s press release.