Have your say on new location for Armley Park playground 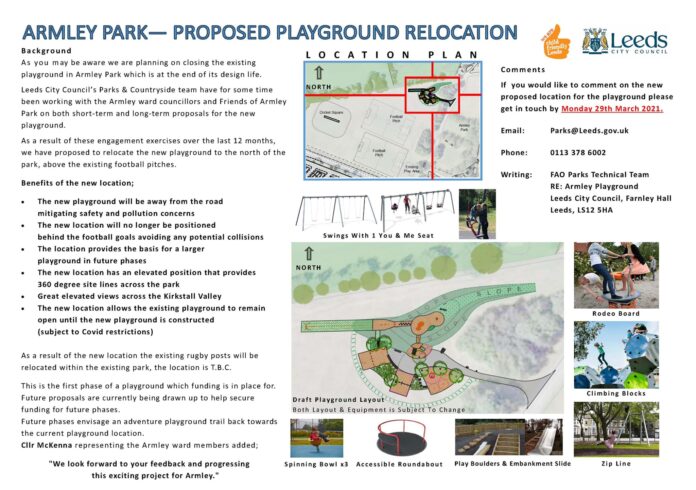 A public consultation into a new playground planned for Armley Park has been launched by Leeds Council chiefs.

The council has been working with the Friends of Armley and Gotts Park to replace the existing run-down playground.

It’s proposed to move the playground, which is currently near the entrance to the park, to above the existing football pitches to the north of the park.

The council says this will distance it from the pollution and dangerous traffic of nearby Stanningley Road. They also say it would lead to a larger playground through future phases and provides a 360 degree view of the whole park. The existing rugby posts will be relocated at a site to be determined in the park.

Initial proposals for the first phase of the park include an accessible roundabout, swings, zip line, play boulders and embankment slide, climbing blocks, three spinning bowls and a rodeo board.

The Friends of Armley and Gotts Park said on Facebook:

“They say ‘good things come to those who wait’ and us folks of Armley have waited years for this moment, but we’re pleased to say we’re another step closer to getting Phase one of the playground started.”

Future phases, which currently don’t have funding, include an adventure playground rail back towards the site of the existing playground.

Leeds City Council Parks and Countryside team are asking for any comments on the location of the new playground before work starts and is welcoming comments until 29 March via parks@leeds.gov.uk.