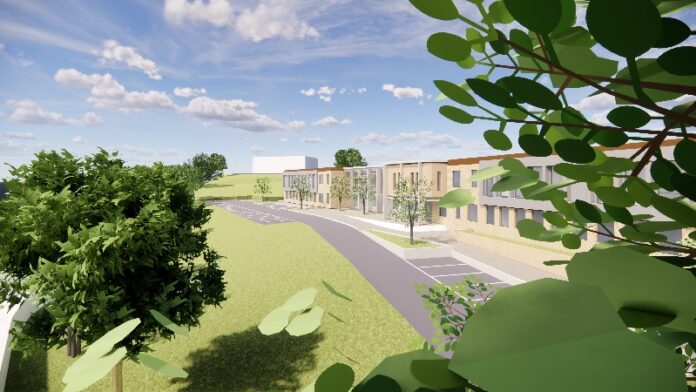 Plans have been unveiled – and a public consultation launched – on proposals to build a new £9m sixth form college in Pudsey.

The Pudsey Sixth Form College would offer local young people access to state-of-the-art equipment and facilities, as well as a broad curriculum delivered by experts in post-16 teaching.

Located on a disused former rugby pitch within the grounds of Crawshaw Academy, the two-storey Pudsey Sixth Form College would include 26 classrooms and offer local young people access to cutting-edge equipment and facilities, including science laboratories, art and design studios, drama and theatre performance spaces and practical rooms.

Up to 600 students will benefit from specialist teachers who will offer up to 26 different subjects, including A Levels and BTEC-applied qualifications, broadening opportunities for students and preparing them to take the next step, whether that be apprenticeships or further education.

It is anticipated that by 2030, the number of 16-18-year olds attending post-16 provision in the Leeds region will have increased by approximately 20%, placing additional capacity restraints on existing education facilities.

It’s hoped the creation of Pudsey Sixth Form College would help meet this demand and ensure that local young people can access the highest standards of education provision in their local area.

Should the development receive planning permission, it is anticipated that the new sixth form would open its doors in September 2023.

Bill Jones, Deputy CEO at Luminate Education Group, said the plans will bring a currently disused site which is closed to members of the community, back into public use. He added:

“We’re delighted to be bringing forward these ambitious and much-needed plans which would benefit young people in Pudsey and throughout nearby communities.

“Our hope is to provide 16 to 18-year olds with a modern learning environment, which delivers outstanding results and supports the transition of students from school to higher education or employment. As well as enjoying access to high quality facilities, students would have the chance to study a much broader curriculum, opening the door to career opportunities and other experiences.

“Pudsey Sixth Form will take a holistic approach to education, ensuring that students are not only fully prepared for their next step, but also finish as well-rounded, socially aware citizens.

“By investing in education provisions in Pudsey, we will not only ensure that young people have additional learning opportunities locally, but we will also help to create additional space for the growing number of 16-18-year olds in Leeds over the next decade.

“We are eager to ensure that the local community is at the heart of our plans and would welcome all feedback during this consultation phase.”

Access to the site – which used to be the bottom rugby pitch at the school but has been unused for years due to drainage issues – would be via a new entrance off Kent Road.

Pudsey Sixth Form College would be designed to utilise renewable energy to reduce carbon emissions, and include outdoor learning spaces and pedestrian access for students. There will be 40 parking spaces and 60 bicycle racks for visitors and staff.

The proposals have been brought forward by Leeds Sixth Form College, a member of Luminate Education Group, in partnership with Crawshaw Academy, Co-op Academy Priesthorpe, and Leeds West Academy.

The public consultation will run until 2nd August 2021.

Members of the community can learn more about the plans and provide their feedback here.