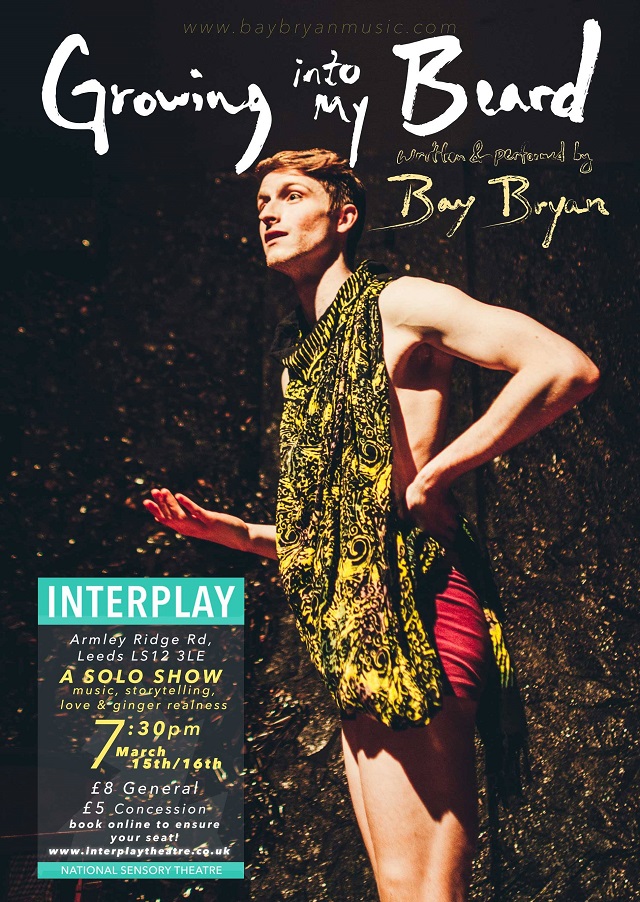 Performance artist and singer/songwriter Bay Bryan is incredibly excited to bring his solo show ‘Growing Into My Beard’ back to Interplay Theatre in Armley, writes Harriett Meiwissen-True.

One year older and hardly any wiser, Bay brings a fresh spin to this constantly evolving script. With clever direction from Claire-Marie Seddon this duo bring to life a story that is both deeply personal and queerly familiar.

At the heart of ‘Growing Into My Beard’ is one ginger’s personal quest to obtain true love.

By way of original songs, dramatically told personal anecdotes and justified farcical movement, Bay weaves together a coming-of-age tale that is romantically nostalgic, profoundly authentic and above all hopeful.

“Bryan’s performance is open and vulnerable… and fosters a strong sense of community between performer and audience.”

“To me, Bay’s story is a great statement of why celebrating the acceptance of your queer identity is just as vital as acknowledging the struggle of being queer…”

“…[Bay]’s performance is so romantic and heartfelt… his interpretation of storytelling-meets-cabaret is just delightful.”

Concession tickets available for anyone with an LS12 postcode. There is also 20% off with all group bookings of more than four tickets.

The first rendition of “Growing into My Beard” debuted in the East Village, NYC at Under St Mark’s Theater in May 2015.

Then in 2016 it went on to enjoy successful runs at the One Catches Light Festival in Brooklyn as well as the Proud AF Solo Festival at The Tank in NYC. Most recently GIMB played at Shine in Boulder, CO (July 2017) and Interplay Theatre in Leeds, before that (December 2016).

Bay Bryan is a singer/songwriter and performance artist originally from Golden, CO. His music can be described as a fusion of folk/soul/theatrical-pop with vocals likened to artists such as Laura Marling, Jeff Buckley and John Legend. You can find his music on iTunes, Bandcamp & Spotify.

From writing/performing his own music, to touring ‘Growing into My Beard,’ to composing music for the award-winning animation The Walker (by Heather Collins; Produced by Matt Groening), Bay’s ultimate passion lies in story. He wants to tell the exceptional ones, and he wants to tell them well.

Hit them for six at Fulneck summer cricket camp