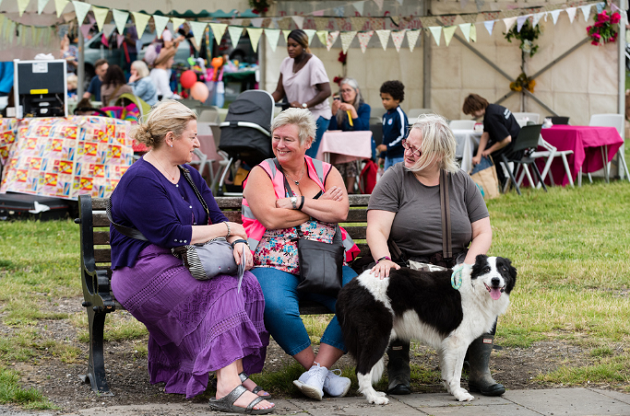 Armley Moor hosted this year’s fun-filled Armley Festival. The Festival team were delighted that, despite a dodgy forecast, the weather held as Armley welcomed over 2,000 festival go-oers.

Mik Artistik, fresh from his success at Glastonbury festival and on his way to Latitude, provided a lively, quirky and talented opening which paved the way for a showcase of artists and musicians.

These included fellow Glasto performer Charlie Limm, local talent Eric Spike, who had teens queuing up for selfies after his performance and The Redwood River Band, who had locals up dancing and cheering to round off the festival.

Alongside the musical and entertainment crowds were wowed by the pop up acrobatic encounters throughout the day and lulled by the Institute of Crazy Dance Hammock boat, complete with its very own crew.

There were over 40 stalls at the festival, with support and food stalls from the local churches, Mosque and Temple.

There was a fine array of activities courtesy of Artists from Assembly House and local Breeze inflatables. There was also input from our local Neighbourhood Policing Team and local Fire Service.

The Lord Mayor of Leeds toured the festival and spoke very highly of the event and the way the community was coming together.  One of the highlights for the locals was the Armley’s Got Talent competition, with a range of acts performing for our discerning judges.

The whole vibe of the festival was positive and inclusive and don’t worry if you missed it, the festival team are already planning more events for Armley.

If you would like to be involved in any way we would love to hear from you either via our Facebook page or email armleyfest@gmail.com.