Farsley Celtic saw their lead at the top of the division trimmed to two points as they were forced to settle for a share of the spoils in a 1-1 draw with Hyde United.

The Celts had taken the lead through Nathan Cartman before Dominic Smalley hit back immediately for the visitors, and Hyde’s defence stood strong to snatch a point. 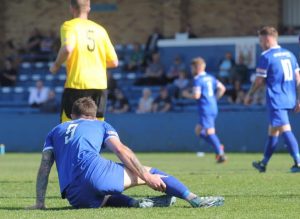 Farsley Celtic Manager Adam Lakeland was delighted with his side’s efforts despite not taking all three points, as he said:

“I can’t really fault the effort of the players today, it was a difficult day, very, very hot, and tough for both sets of players physically.

“When the opposition come and play behind the ball as they did it makes it even harder to play through the lines and get on the half turn and sometimes in the second-half we’ve got in behind and cut balls back that have been bobbling and bouncing around.

“My only disappointment is the goal we conceded, it was a really soft goal, it’s come from a throw-in on the halfway line and we shouldn’t allow them to get in that easily.” 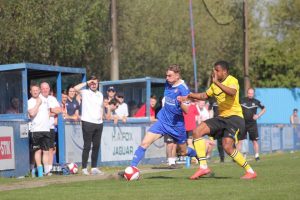 Farsley started on the front foot as Jimmy Spencer and Nathan Cartman both had early chances, Spencer dragging wide, before Dave Syers’ shot fell to Cartman who couldn’t hit the target.

However, Nathan Cartman made amends for his earlier miss after 20 minutes, as Spencer’s shot took a deflection and fell kindly for Cartman who prodded past Peter Crook from close range.

The visitors were behind for just three minutes as they struck back through Dominic Smalley, the right-back breaking in behind following a throw-in and tucking the ball into the goal past Kyle Trenerry. 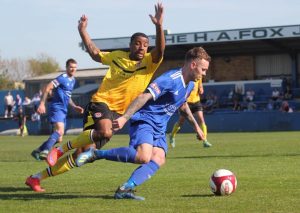 Farsley came close to retaking the lead shortly after half-time, as Nathan Cartman received the ball from Will Hayhurst and saw his shot blocked, before laying the ball off to Ben Atkinson who fired over.

The Tigers’ shot-stopper Peter Crook was forced into action just after the hour mark, as he scrambled across his goal to push Dave Syers’ low shot away.

The best chance to earn all three points for the hosts came with six minutes remaining, as Farsley worked the ball well down the left, and Jack Higgins teed up Ben Atkinson, but his first-time strike from the edge of the box thundered against the crossbar and away to safety.

Adam Lakeland’s side continued to push forward, and in the final minute of added time there was an almighty scramble in the box, but in the end Danny Ellis saw his effort comfortably saved by Crook. 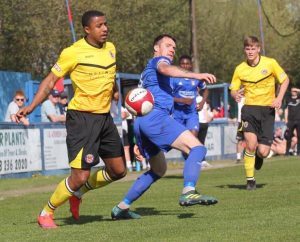