West Leeds Dispatch readers have said a dangerous narrow road in Burley which suffers from traffic congestion SHOULD become one way.

As reported last week, residents and community groups in Burley are campaigning for St Ann’s Lane – which connects Burley Road and Kirkstall Lane – to become one way.

Some residents said that at many places on the lane cars must mount the pavement to pass each other.

A poll conducted by The Dispatch showed 76.71% of respondents voted on favour of the lane becoming one-way, while 23.29% voted against. 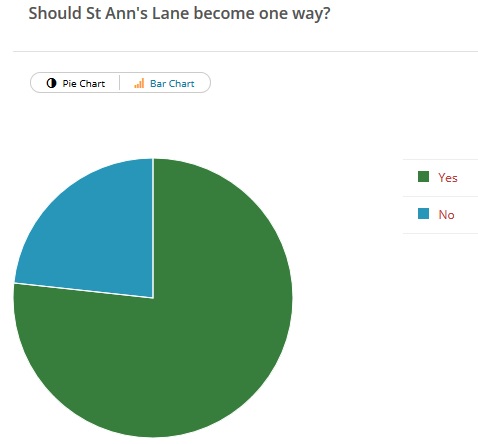 The poll was completed by more than 150 respondents.

“[That’s] brilliant to hear, seems the message hit home. Many thanks [to the Dispatch] for doing the piece.”

Our article prompted a debate on Facebnook.

“The road needs widening by taking the big wall down and removing the trees.”

Adele Rae was in favour. She added:

“The fact of the matter is St Ann’s Lane cannot cope with the current volume of traffic at the width it is presently. Time and time again cars mount the pavement to avoid oncoming traffic. It only takes one slip in concentration and we will be facing a serious accident or fatality.

“I appreciate that this will have an impact on other roads who will share the burden of the traffic levels which go up St Ann’s Lane but it is just that…a lane. People cannot actually walk safely down the pavement let alone play out. This is not about car drivers this is about pedestrians…we will all be inconvenienced if the one way system is introduced but surely a life is worth more than a little inconvenience?”