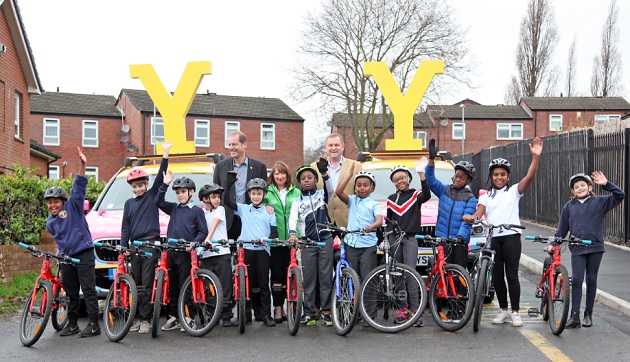 They met volunteers at New Wortley Community Centre’s Bike Library before heading to Castleton Primary School, where pupils were taking part in a cycling skills session.

Earlier this year, the Bike Library based at the community centre received £10,000 through CityConnect’s community grants scheme to help fund a member of staff to develop the project and increase the numbers of people cycling in the area.

The community centre now has six regular volunteers reconditioning bikes for the Bike Library. More than 120 people have taken part in activities there, including hiring a bike, led rides and bike maintenance training sessions.

“Thanks to the funding from CityConnect we’ve been able to maximise the Bike Library’s potential and the progress we’ve made during this project has created a valuable local resource, which will continue to benefit residents in the future.”

As part of its Bike Friendly Schools scheme, the CityConnect team has also been working with Castleton Primary School, where every year five and six pupils can ride a bike.

Working with children and staff at schools on or near CityConnect routes, including the Bradford Leeds Cycle Superhighway, the scheme provides access to loan bikes, as well as cycle training for pupils and staff, led rides and improved bike storage.

“From boosting physical activity to instilling good travel habits that last a life time, we know encouraging more of our pupils to cycle and walk brings real benefits.

“Taking part in CityConnect’s Bike Friendly Schools scheme is a great opportunity to get more of our pupils cycling.”

“It was fantastic to see so many young people engaging with cycling in Leeds today.

“We are incredibly proud of our bike libraries, which are a direct legacy of the Grand Depart being held in Yorkshire, and we all know the Tour de Yorkshire is so much more than a bike race. It brings communities together but also inspires people to get out and give cycling a go.”