We have written this statement to outline our position on the development of Abbey Mills and the access road which the council’s highways department are proposing as part of the redevelopment scheme.

Local residents have expressed concerns about this (as featured last week on the West Leeds Dispatch), both with regard to the impact of the access road on the Abbey grounds and the closure of the junction of Norman Row and the A65 which is part of the council’s road scheme.

Abbey Mills is a grade II listed building in council ownership. It has been allowed to fall into disrepair, which includes collapsed parts of the building and extensive water damage. Previous attempts in 2006 to market the site for residential development failed and since then, the building has been left largely vacant and neglected. 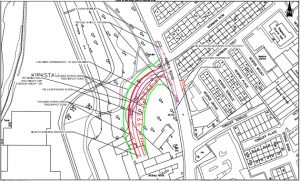 Two years ago the Kirkstall Valley Development Trust (KVDT) approached the Council with a proposal to develop part of Abbey Mills for community use.

The buildings are in such poor condition that it is difficult to devise a viable scheme. KVDT is presently looking at a social housing development for older people. There is no certainty that such a scheme will be viable at the present time but we are supporting KVDT in their aspiration to develop social housing on this site.

KVDT and the Kirkstall councillors want to use the existing entrance to Abbey Mills opposite the Kirkstall Leisure Centre, which would be widened to improve visibility.

Traffic signals on the A65 and B6157 slow the vehicles near this location, so we believe it is safe and viable. KVDT have engaged their own highways engineer to develop the design of this scheme.

The access road the council highways department are proposing is a new road from the back of Abbey Mills, connecting to the A65 opposite Norman Row. This road would intrude into Kirkstall Abbey Park, causing serious damage to the sunken garden of grade 2 listed Abbey Villa and would result in extensive loss of mature trees.

Also, the 9m height difference between the Abbey Mills car park and the A65 at Norman Row requires the access road to follow an elevated embankment.

We are concerned it will look like a motorway slip road unless proper engineering measures are taken to screen it, but, either way, it will have an impact on the environment of the area.

The highways department’s initial design closed Norman Street because their proposed connection opposite Norman Row does not meet the highway safety standards in the Council’s Core Strategy and in ministerial advice. In addition to 74 houses, Norman Street serves a health centre, a children’s centre and St Stephen’s School.

Closure would seriously inconvenience many people. As a result, officers now suggest closing Norman Row, but there is no space to do a three-point turn in the road so residents, visitors, refuse trucks and emergency vehicles would have to reverse 120m up the hill and out onto Morris Lane.

The Kirkstall Valley Community Association are consulting with local people about this aspect of the proposal and have expressed their concerns about the closure of Norman Row. We support KVCA in raising these concerns on behalf of the local community.

There has never been a recorded accident at the existing entrance to Abbey Mills. In contrast to this, there have been multiple accidents at junctions between the Normans and Abbey Road.

It seems to us that in all respects the proposed new access is substantially worse than the existing entrance. KVDT is working towards a largely car-free development.

This is consistent with the Council’s new commitment to be carbon-neutral by 2030, having passed a motion declaring a Climate Emergency at the last council meeting. We are therefore pressing the council officers to abandon their present highway scheme for Abbey Mills.