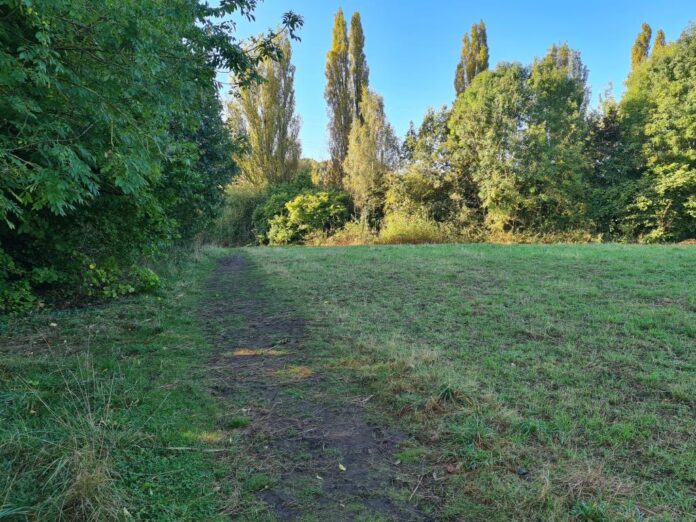 The news that Kirkstall Valley Nature Reserve (KVNR) has been put on the market by land owners National Grid (whose predecessor owned the former power station) has brought back many memories and a feeling of revived hopes for the future of the area.

Now must be the time for the Council to take a lead and ensure the Reserve’s future, based on their original plans for the Kirkstall Valley Park and working in partnership with local groups.

Otherwise the site could be auctioned off for as little as £500 to virtually anyone!

The Reserve  is located on a former municipal waste and landfill site and the old ash lagoons of Kirkstall Power Station, and when I started my job as the first warden of the reserve in early 1993 major decontamination and landscape creation work was in its final stages.

The contract was funded by the Leeds Development Corporation (LDC) but I was employed by Yorkshire Wildlife Trust who were granted an initial financial legacy to manage the site.

The idea for  the reserve by the River Aire at Kirkstall as part of a Kirkstall Valley Park had come from the Leeds Local Plan (1981) but was later given a massive boost when it won the 1988 European Year of the Environment prize to create an urban nature reserve.

The group submitting the bid, was Eye on the Aire, a Leeds pressure group and campaigning organisation for water quality and many other things river related.

The aim was creating not only a nature refuge in a regeneration area but an education resource for all Leeds Schools and particularly children who lacked access to the countryside and natural environment.

The wider local context  was a titanic battle that had been ongoing in the Valley since 1988 regarding  development plans by a Developer/Council partnership  for two retail parks in the Kirkstall Valley (ultimately Morrisons and Cardigan Fields) and numerous other Valley developments including commercial buildings and a ‘Dinosaur Park’.

This was strongly resisted by people living in Kirkstall and Burley and, notably, Councillor Illingworth to prevent the Valley being wallpapered by insensitive development.

Ultimately however the Council’s control of the Valley was swept away by the Thatcher Government when in 1988 the Leeds Development Corporation (LDC) was established over an area  stretching from Kirkstall to Hunslet with funds of £50million to invest and all without local democratic accountability.

From then on, until LDC was wound down in 1995, the 1987 development proposals went slowly through the LDC and in 1995 planning permission was granted for a  Morrisons supermarket and major enabling highways works in Kirkstall centre, in spite of massive opposition. But LDC did support the nature reserve project, perhaps as a kind of token quid pro quo for the future development which was going to have a massive impact on life in the Valley.

I was employed by Yorkshire Wildlife Trust at the start of 1993 on a part time basis to manage the reserve and to develop an education project for Leeds schools. I was initially based at Hollybush Farm with a steel container on the reserve where we kept tools and a camping gas ring to make a cup of tea. There was a Portaloo too but fortunately never used sent off to pastures new!

The early years were tough.

Thousands of  small trees were planted as part of the landscape works and initially we battled to stop them becoming overgrown, especially  as we decided to manage the reserve organically, so no herbicides! We planted more trees and shrubs to create sheltered habitats for invertebrates and as areas of woodland grew up thinned them out to create clearings and woodland edge.

There were also leaking ponds to re-line, and poorly established grassland was stripped of imported topsoil and sown with quality meadow seed mixes to create more diverse and beautiful flower rich meadows.

The ecological management was undertaken not just to improve biodiversity and enrich the green and blue corridor  through the Valley  but to transform the Reserve into a place that local schools and communities wanted to visit for pleasure.

In 1994 a large Portacabin with toilets and a kitchen was delivered to the Reserve as a teaching and a community facility. In preparation we worked hard installing a septic tank to enable the loos to be used and created two reedbeds to purify the building’s grey water.

We even dug a half-mile long trench to reduce the prohibitive cost of installation of a landline telephone to the Portacabin. The reed beds also served as a cleansing system for water pumped from the River Aire to top up the Reserve ponds.

Sadly though vandalism at the Reserve, was relentless and some of it seemingly quite malicious. Eventually following two arson attempts we had to demolish the portacabin losing our phone connection and toilets.

But we created a giant butterfly mosaic on the area where the Portacabin had been involving round 12 different schools. it was around this time that David Bellamy, then a major TV wildlife personality, visited the Reserve for a fun day.

All of the above work and much more besides would not have been possible without support from wonderful volunteers from local communities, students, work experience trainees and regular graduate placements from Northern Spain as part of an EU funded scheme.

Also there was great input from BTCV’s  conservation volunteers, located just up the road at Hollybush Farm and the CALICO group  a practical conservation group for people with learning disabilities were very regular visitors undertaking practical task days and access improvements.

Over the next five years many successful partnerships with local organisations evolved and the Reserve became very active in providing education visits for Leeds Schools.

We raised significant amounts of funding for new community based projects and organised regular holiday playschemes and a Wildlife Watch Club which visited other nature sites around the city.

A community orchard of around 30 different fruit trees was planted by community groups and numerous art projects included the creation of a set of  lovely gates and road sign by metal sculptor Mick Kirkby-Geddes working with two local schools on the design and using recycled steel objects in the manufacture.

We also worked off site on numerous community projects improving community gardens including taking allotments at the site that has become Kirkstall Farm and also Burley Model Allotments where we also had a polytunnel.

In spite of vandalism the Reserve thrived but we were also up against a lack of indoors space to run activities in bad weather. In response  we planned a new environment centre, a base for managing the Reserve and education visits, a place for local community activities and lettable office space, we lobbied the Council for a site at St Ann’s Mills.

The key idea was to create a community asset that would provide funding to sustain the ecological management of the Reserve and its work with schools and the local communities. A competition for a bridge across the Aire, to create better and safer access was also launched with Leeds University Civil engineers.

The project was evolving around the time of the 1992 Rio Conference on Sustainable Development and the issue Local Agenda 21 as a blue print for local sustainable development. Also Leeds had also recently been named as one of four Environment Cities in England and everything seemed to be going from strength to strength

Ironically National Grid were at that time prepared to transfer the tenancy to the local management committee but only if the YWT agreed, which it did not.  After much soul searching I decided to leave my post as I could see no way forward other than constantly applying for relatively small grants that would not bring the reserve to its full potential especially as the initial legacy had by this time almost run out. Also we were still working with schools without any facilities which was far from ideal and at times felt unsafe.

I went on to establish a small charity with members of the Reserve committee to set up a small environment centre in nearby Headingly. We were funded by the Department for Education to undertake a two year youth project working with young people excluded from school, ran our allotment project and several community based environment improvements.

Whilst these projects were successful we had lost our main focus of activity and it just wasn’t the same without the Reserve.  When our building lease expired due to redevelopment and following a short spell in yet another location we eventually closed the project. It was very sad end to something that had been so very promising.

Sadly YWT did not sustain our work at the Reserve  and it became very neglected and although still beautiful and valuable as a nature space, public access, management and environmental interpretation is now very poor in comparison to what it was. But it could be once again with more enthusiastic local involvement and committed management. It is very telling that the same biological records in YWT’s reserve description of 65 bird species and 130 plant species that we recorded in the 90’s have not been updated in 30 years.

Today green and blue spaces are more appreciated and more essential than ever for so many different reasons.  As COP 26 enters its final week and the eyes of the world are on climate change and environmental destruction, come on National Grid and LCC make it happen, protect the reserve ensure its protection in perpetuity, let’s have a good news story.