Imagine a guy who puts in hours of work to make his local park better – only to be faced with the discovery of used drug syringes and human excrement, writes John Baron.

That’s what happened to Antony Newby in Armley Park the other day. Antony’s one of the good guys, he cares passionately about the park and runs the now infamous 161 Killer Stairs run in the park attended by a few hundred people every Sunday.

Antony shared a video on Facebook of the syringes and excrement – we’re not going to show it on The Dispatch for taste reasons, but if you’re interested in viewing it (and following the comments in the subsequent thread) follow this link. As Antony explains:

“I have been trying to run my own campaign against this and part of it has been working. The park was getting cleared up – but this is it this week!! More needles and human shit! My main concern is that CHILDREN play on this park and that CHILDREN found these needles!!!

“I have been threatened by the tramps that they will stab me with one of their infected needles! I feel like I am on my own trying to get this sorted and it is still NOT sorted.”

You can understand his frustration. 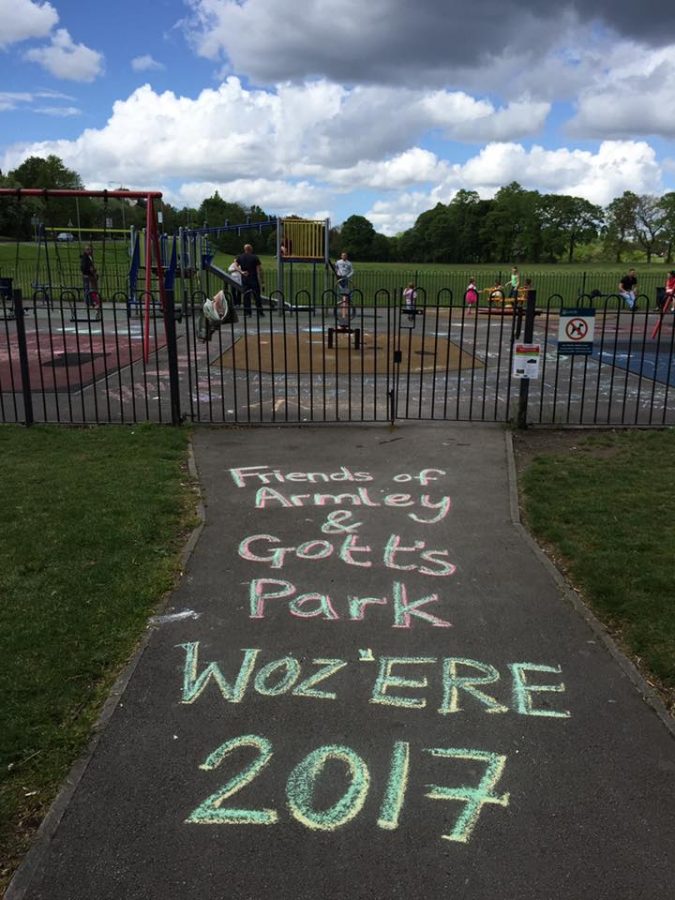 He says he’s met with the council – and their extra patols only last a couple of weeks. He added:

“I even designed some posters to put on the trees around the park but the council said I can’t put them up because I might damage a f*****g tree!!! A tree????? What about the children!!!!”

The police are aware of the problems and have agreed to take some action, but it’s clear pressure needs to be put on the police and alcohol and drug service Forward Leeds from all users of the park to make sure something is done about this.

All park users need to send out a clear message:

It is totally not acceptable.

But is Antony alone?

The answer is no, and we can all play a part in improving the park.

The people who support his ‘killer steps’ run are testament to that. The more people there are using the park, the more likely it is that incidents with drug syringes will be minimised.

And last autumn the Friends of Armley and Gotts Park group was set up to help reclaim the park for local people. The group of enthusiastic volunteers is only in its infancy, but has a number of action days planned during this summer – and that’s just a start.

Can you get involved and help them improve the park for all? Contact them via the Friends’ Facebook page for more information.

If you see anything amiss, report it! As one of the commenters on Facebook said:

“The only way the police will continue to patrol is if people keep reporting what they see, if no-one reports and they do not see a demand for patrols, they will reallocate the resource to somewhere else where crime is being reported. It’s crap but true.”

Every incident logged with the police helps get resources into the park to help tackle the problems. If you get fed up of waiting forever by ringing 101 you can e-mail innerwest@westyorkshire.pnn.police.uk.

If you think I’m an idealistic fool living in cloud cuckoo land that things can be turned around, you’ve only got to look at Middleton Park in south Leeds as an example.

Miggy Park had all sorts of problems with anti-social behaviour.

Themn local residents got together and fromed the Friends of Middleton Park group. The group was made up of residents fed up with burnt out cars each week, assaults and, yes, drug dealing.

The result? Within a few years a successful £1 million + bid to the Heritage Lottery Fund led to the building of a new Visitor Centre and other park improvements. There’s a summer programme of regular events, activities and walks.

Over the years I got to know many of these ‘Friends’ quite well.

They’re a determined and dedicated bunch – much like the Friends of Armley and Gotts Park. They help stage and encourage regular events, there’s annual Shakespeare in the park, guided walks, nature trails, a produce and craft show and lots more.

That’s not to say Miggy is some sort of idealistic utopia. Of course it isn’t – they still get problems with anti-social behaviour, but the park is in much better nick than it was. It’s no longer a no-go zone. They’ve turned it around.

Get involved with Antony, do the 161 killer steps, join the Friends group, report anti-social behaviour, lobby the council and the police. Middleton shows it can all be done.

But it won’t happen by itself…