The efforts of the small band of volunteers at the Pudsey in Bloom group are to be commended – the floral displays across the town centre are beautiful.

The area between the library – aka the new ‘community hub’ – and the Butchers’ Arms looks absolutely lovely.

I take my hat off to the people who give their time freely to volunteer and make a difference in their town. Every week volunteers take part in what’s called ‘Tidy Tuesday’, deadheading and keeping up to their work.

‘In Bloom’ groups are about so much more than ‘flowers’ or spring and summer colour – they’re about civic pride and putting something back into your community. The Pudsey volunteers really should take a bow.

I also have to pay tribute to the people at Pudsey Litter Action, who also volunteer to run community litter picks across the town. They even have a pledge on their Facebook page which reads:

“I pledge to drop no litter, no matter how small, and to pick up one item each day.”

Great stuff – every community should have a group like that!

Combine all this with the work of civic guardians Pudsey and District Civic Society, there’s clearly a will and a community spirit in Pudsey to keep improving the town.

But volunteers can only go so far. They’re not the local authority with a legal and elected responsibility for roads, paths, the market etc etc.

I’m a Pudsey lad born and bred (I moved away about 20 years ago, but my mother still lives there).

It struck me on a visit this week just how TIRED the town centre and Lowtown was looking.

Uneven paving stones (yes, I know the ones outside B&M have been done in past 12 months but it’s still a problem in the town) and poorly maintained paths, weeds growing on the side of pavements, a Saturday market that’s in need of a real boost (and some proper promotion). The list goes on …

There are a number of empty shops down Lowtown and Lidgett Hill, as well as the former Santander Bank building next to the Post Office which looks especially horrible now it’s empty.

And don’t get me started on that monstrosity of a bus station!

I don’t want to talk Pudsey down. I love it too much. It’s home and it’s still full of memories and friends for me. Yes, we’ve had a new park entrance this year, which is nice enough.

But Pudsey is in need of some real thought and investment. If I compare Pudsey to Morley, Pudsey comes up short in terms of market, shops and the overall environment, although it probably has a better park.

Farsley’s got a great vibe to the village, with its boutique shops, great pubs and restaurants. Pudsey’s just not in the same league at the moment.

Heck, even Armley and its new heritage paving, shop fronts and the refurb of the former Mike’s Carpets building scrubs up well.

And Bramley has benefited from improvements at the district centre, including a resurfaced car park by the centre owner. 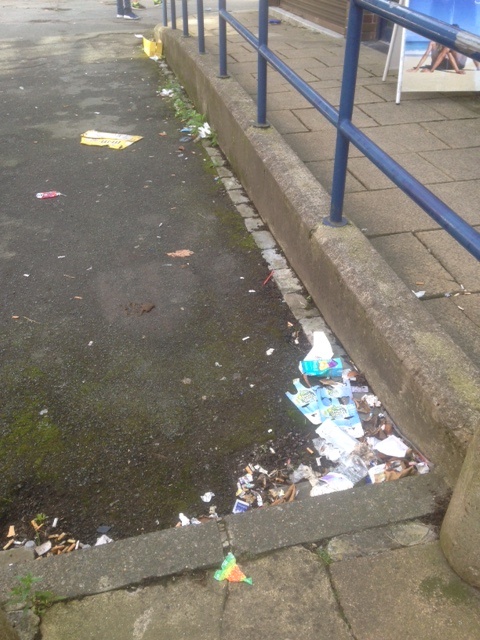 Pudsey needs the same sort of big investment that Armley had through the Heritage Lottery Fund.

Imagine Pudsey Town Hall or Trinity restored in the same way as Mike’s Carpets? Armley has its own problems with anti-social behaviour, but there’s genuine optimism that the Lottery funding could be the catalyst to further investment and a change in fortunes.

It’s this sort of major scheme that Pudsey lacks.

What troubles more than anything is that Leeds City Council doesn’t seem to have the ambition to make Pudsey any better than it is.

Granted, the council’s budget has been decimated by central Government (savage cuts that seem more ideological than necessary now, if you ask me) – but that hasn’t stopped the council helping to regenerate other parts of the city through the Lottery and other grants.

Why doesn’t Pudsey have a town council like Morley, Wetherby, Horsforth, Otley and virtually every other town on the outskirts of Leeds?

It’s time for Pudsey residents to make a noise and demand better for their town.

And it’s time for the council to put Pudsey higher on its priorities, or face the accusation that it’s managing the decline of a proud town that so opposed being swallowed by Leeds during local government reorganisation 40-odd years ago.