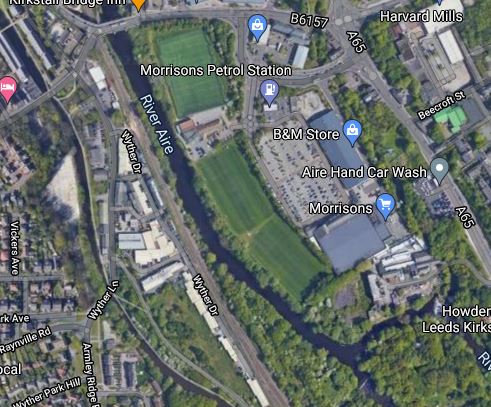 Environmental campaigners have spoken out against the proposed felling of 63 mature trees along the River Aire as construction continues on flood defences in Kirkstall.

They are asking Leeds City Council to rethink their multi-million pound flood defence scheme, aimed at protecting homes and businesses along the Kirkstall Valley.

Fiona Blair, of the Armley Trees Campaign, has called on the council to engage with concerned residents and explore solutions which do not negatively impact biodiversity and which see trees as part of the solution, rather than the problem.

Fiona Blair, of the Armley Trees campaign, has called on the council to engage with concerned residents in the Kirkstall Valley and explore solutions which do not negatively impact biodiversity and which see trees as part of the solution, rather than the problem.

She does not dispute the need for flood defences but says one of the oak trees earmarked for felling could be around 100 years old. While Leeds City Council says it will plant more trees to mitigate the impact of the felling, Ms Blair told West Leeds Dispatch:

“There are always alternatives to tree felling, and these are especially important to explore in a climate emergency, with the council aiming to be net-zero carbon by 2030. The UK is one of the most nature-depleted countries in the world and we need to try harder to prevent biodiversity loss. There must be a way of having a win-win situation.

“We’d like them to put the work on hold and find a different way to achieve the defences where we’re preserving and using trees alongside the barriers.

“It’s all very well the council saying they are planting trees elsewhere, but we urgently need to be conserving nature if we are really serious about addressing climate change. The whips they’re putting in now will take many years to reach the same level of a mature tree in terms of capturing and storing carbon, alleviating flood risk and purifying the air.”

Fiona warned the tree felling would be taking place during the nesting season for birds and when bats are giving birth and called for alternatives to be considered.

Campaigners met with Flood Alleviation Scheme bosses earlier this week and Ms Blair says she was told all the details had been made public when the plans were submitted over two years ago. But she was critical of the consultation and planning process which surrounded the scheme, and the lack of information regarding the current designs and how they are to be implemented.

She said the original planning application had 238 lengthy documents to wade through and called on better engagement and ongoing communication with the public.

As WLD reported in January 2019, a number of community groups initially objected to the proposals and pressed for more consultation and time to comment on multi-million pound plans.

Environmental campaigner Paul Chatterton, from Bramley, is a Professor of Urban Futures at Leeds University. He added:

“We can defend our homes and businesses and keep the trees It’s not a case of either/or. Biodiversity needs to be seen as the solution, not a problem. Trees work really well as flood defences so what we have in Kirkstall is an amazing opportunity to work with the existing trees and still put the flood defences in as planned.”

Moe than 100 trees have already been felled in the Redcote Lane area, leading to Kirkstall councillor John Illingworth to voice his concerns

He told the BBC earlier this week that the better way to deal with this would be to widen the flood plain and re-wild it. He said of the Redcote Lane area: “It’ll take 50 years to re-grow what was once a densely populated area of trees. It is now barren.”

A Leeds City Council spokesperson said in a statement:

“We have worked diligently to ensure any tree loss is kept to an absolute minimum. Unfortunately removing some trees is essential for providing protection against flooding and catastrophic effects like the ones experienced as a result of the 2015 Boxing Day floods.”

Planners have said some trees could be removed where it has not been possible to avoid them by changing the design of the flood defence construction works. Three trees will be planted for every tree that is removed, with a preference of re-planting as close as possible.

Natural Flood Management measures included as part of the flood defences include new woodland creation involving thousands of new trees; land management, and river and flood plain restoration, for example re-channelling to slow down the flow of rivers and using storage ponds.

Earlier this year 5,000 trees were planted at the Leeds Brownlee Triathlon Centre in Adel to store and slow the flow of flood water after heavy rain, making Leeds more resilient to climate change.