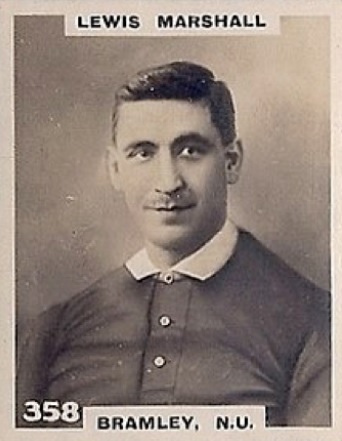 In the fourth of a series looking at Bramley rugby league legends, Paul Abraham puts the spotlight on the late, great Lou Marshall …

Lou Marshall joined the Villagers from Leeds in February 1919 in exchange for winger Squire Stockwell, who later became a Test player.

He made his debut for Bramley on Feb 15th 1919 as a try-scoring centre in an impressive 33-0 home victory against York.

He still holds the unique distinction of winning an international RL cap whilst with Bramley.

Marshall played loose-forward for England when they were defeated 13-2 by Wales at Wigan on February 7th, 1923.

Among his team-mates that day were ‘immortals’ such as Harold Wagstaff, Jonty Parkin and Billy Batten.

His last game for the villagers was a 3-13 defeat at Wigan Highfield on New Year’s Day 1925, where he completed the unique distinction of scoring on his first and last appearance for Bramley in a career lasting five years and 11 months.