Bramley RL archives: Why 1961-62 was a golden season for the Villagers 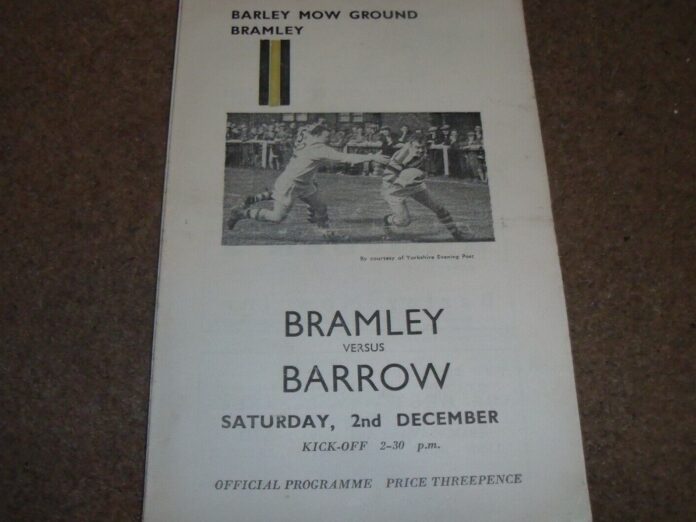 Following the rugby league’s decision to have two divisions from the 1962/63 season, Bramley knew they would have to improve on the 22nd place (and 11pts off the 16th position) they had finished in the 1960/61 season.

The target was that the top 16 teams in the league table at the end of the 61/62 season would be given First Division status.

Bramley kicked off the season with an impressive 20-5 home victory against Rochdale Hornets with full-back Johnny Wilson kicking seven goals in what would be a record-breaking season for him.

The next six matches provided Bramley with just two draws, away at Halifax and at home to Keighley, and four defeats including a 15-36 reversal at York in the First Round of the Yorkshire Cup. Interestingly this would be the most points conceded in a match by Bramley throughout the season. The first six games brought Wilson 17 goals and Wrigglesworth three tries.

Two hard-earned victories at home to Liverpool City (13-8) and at Dewsbury (10-5) was followed by defeats at Featherstone and at Barrow with a 24-7 home win against Castleford sandwiched in between.

Bramley then hit a purple patch, winning five and drawing one (2-2 at Doncaster) of their next six matches, including a spectacular 22-10 home victory against reigning Rugby League Champions Leeds, with Johnny Wilson kicking 8 goals.

Wilson now had 62 goals to his name, with Stone and Wrigglesworth leading the Bramley try-scoring list with five tries each. After 16 league matches, Bramley had the impressive record of 9 wins, 3 draws and just four defeats – dreams of the First Division were now entering the loyal Bramley supporter’s thoughts.

Two defeats on Humberside followed, 9-29 at Hull and a tight 10-16 at Rovers. Three penalties by Johnny Wilson gave Bramley a 6-0 home victory, before a trip to York brought another defeat. February started with a 12-5 home victory against the Gallant Youths of Batley before Bramley crashed out at the first round of the Rugby League Challenge Cup with a 6-34 defeat at Headingley against Leeds.

A 6-20 home defeat against Top-four challengers Featherstone Rovers was followed by Bramley taking 5 points from their next three games, all of which were away, Rochdale (14-14) Liverpool City (9-2) and Hunslet (12-5) the Hunslet match providing a memorable highlight with fan favourite Dave Horn scoring a try.

Wakefield (eventually finishing joint table-toppers with Wigan) inflicted an 11-25 defeat for Bramley at the Barley Mow, before three days later Doncaster gained a shock 2-8 away victory.  Bramley were now battling to remain in the top sixteen with their main challengers being Hull, Halifax, Warrington, Castleford and Leigh.

A victory at home to Hull (16-8) got Bramley back on track with Horn scoring again and Wilson adding another five goals. This result kicked Bramley on and played some of their best free-flowing rugby of the season when winning 28-2 at Odsal, which included Wilson’s 100th goal of the season for Bramley and followed that up with a 31-9 home win against Whitehaven and then defeating Bradford 18-5, the last three games seeing Wrigglesworth going over for four tries in total.

Away defeats at Leeds (5-10) and Keighley (6-32) over Easter got the Bramley supporters worried, but two magnificent home victories against Hull KR (27-16) and York (23-16) made the 7-16 defeat at Castleford in between irrelevant. The last match of the season against York saw Johnny Wilson kick his 130th Bramley goal of the season and create a landmark that would not be overtaken for 30 years.

Stand-off Wrigglesworth ended with 14 tries for the season and was followed by Scrum-half Quinn on 9 and Centre Stone with eight. Jim Hainsworth was the side’s only ever-present which would eventually take him to the still standing club record of 100 consecutive appearances.

To commemorate the team’s achievement, the Leeds-based bookmaker and successful businessman Jim Windsor had gold medals minted to be awarded to each team member as recognition of an amazing achievement in reaching the First Division.