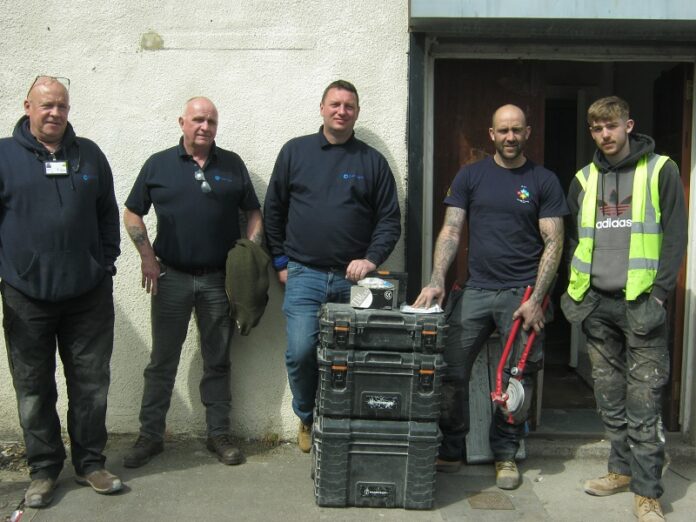 Volunteers working on the renovation of the old ‘Mission Room’ in Armley have received a boost from a leading specialist energy and water services company.

Cenergist have been working to install a ground source heating system to supply hot water to the adjoining flats at Westerly Rise and Westerly Croft in Mistress Lane, Armley.

Over the past two months they have installed central heating radiators in all flats.  The open ground around the Mission Room on Mistress Lane, has been drilled by Cenergist for a number of deep bore holes to supply the hot water.

Cenergist is based in the UK and also works in Spain, Holland and India.  The company specialises in high efficiency district heating and ground source heat pump systems and also water efficient systems for homes, hotels and student accommodation.

Leeds City Mission (founded 1837) – one of the city’s oldest charities – acquired the Mission Room in 2019.  Since Spring last year a volunteer team have been working hard at transforming the building into a contemporary Compassion Centre.

Leeds City Mission will be providing practical help to people in need. There will be sessions designed to combat isolation experienced by local elderly people.

City Mission development worker Andy Dalton explained that over a period of weeks the ground surrounding the Mission Room was like the Battle of the Somme on the Western Front in World War 1.

Deep trenches, mounds of earth, drilling equipment and machinery and the presence of workmen meant an inevitable disruption to the local neighbourhood.

In February a delegation from the company visited the Mission Room and enquired if they could help in any way.  Discovering that an urgent need was the installation of a  central heating system, they immediately offered their assistance.  Andy Dalton gratefully accepted their offer of behalf of the City Mission.

The renovation project was running out of funds and the pressure was on to bring work to a successful conclusion.  He explained that the generous offer of the company was like manna from heaven – it came just at the right time.

A team of workers from Cenergist have now installed radiators in every room, supplied with an energy efficient boiler.

Andy Dalton said that throughout the time they have been working on the flats Cenergist staff had gone out of their way to listen and respond positively to local people who were seeking to cope with the inevitable disruption a major project brings to a community.

The provision of a staff team and materials to install the central heating system in the Mission Room had been a fantastic help in moving the renovation project towards a successful conclusion.

Volunteers will be working over the next few weeks to complete decorating and carpeting of the premises.

Alex Brown, Operations Director at Cenergist said that the company was always keen to have positive relationships with both customers and community.  They were glad that the help provided in the creation of the Compassion Centre would leave a lasting legacy from which local people will benefit for many years to come.

Leeds City Mission is a christian agency which has worked with marginalised people over three centuries and seeks to meet the physical, social and spiritual needs of Leeds residents.