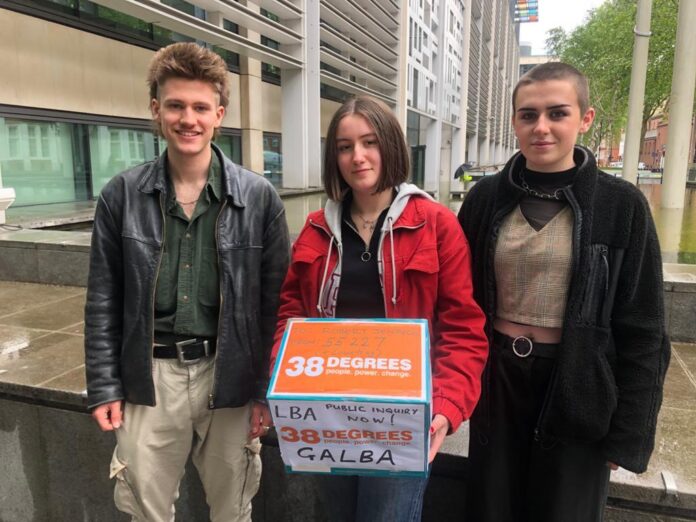 Young anti-airport campaigners have travelled down to Westminster to hand-deliver a 54,000-signature petition to the Government, calling for a public inquiry into Leeds Bradford Airport’s new terminal plans.

The three teenagers, visiting London on behalf of the GALBA campaign group, submitted a petition asking communities secretary Robert Jenrick to ‘call in’ the plans, which were approved earlier this year by a Leeds City Council plans panel.

Naomi Simpson (17, from Wakefield), Martha Dacombe (17, from Ilkley) and Brannoc Stevenson (18, from Leeds) handed in the petition on Friday afternoon, and said the airport expansion would undermine the UK’s chances of cutting greenhouse gas emissions.

LBA’s planning application for a new £150m terminal was approved by Leeds City Council on March 22. But campaigners, as well as both Labour and Tory MPs, supported calls for a public inquiry.

On April 6, Mr Jenrick postponed making a decision on this request, giving no timescale, leaving the future of the plans in limbo.

“The climate crisis is real and we urgently need to cut greenhouse gases. Allowing the airport to expand would take us in completely the wrong direction.

“It’s my generation who will suffer the worst effects of climate breakdown so I’m standing up for our future. I’ve been let down by politicians in Leeds, now I’m asking Mr Jenrick to do the right thing and hold a public inquiry.”

“This is not just about Leeds Bradford Airport. We’re on the brink of climate and ecological breakdown, yet airports throughout the country are trying to expand. Approving LBA’s application would open the floodgates of expansion at other airports.

“Like Greta Thunberg always says, we must listen to the science – and the scientists on the Climate Change Committee say we must stop all airports from expanding. I really hope Mr Jenrick listens to them.”

“We have a real opportunity to make the right decisions today to build a better tomorrow. The good news is that we can invest in green jobs that will help us recover from Covid, fight the climate crisis and create a safer future – all at the same time! That’s the kind of job I want.”

Environmental campaigners have long been opposed to plans to increase the size of the airport, as they claim such a move would increase the capacity for extra flights, thus creating an increase in carbon emissions which would dwarf any positive work done locally to combat climate change.

Some business leaders in the region, however, say such an expansion would be vital to the future of the region’s economy.