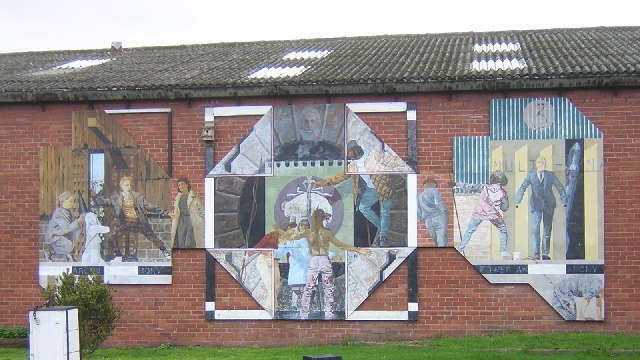 A campaign to save the Oddy Locks Mural in Armley has almost reached its 500-name target.

Campaigners fear the 1980s Fragments from the Post Industrial State mural by Graeme Willson could fall victim to plans for the redevelopment of the Grade II-listed Canal Mills site for 137 new residential units and five commercial units with car parking.

Proposals by Rhodes Asset Management retain Canal Mills, but other buildings on the site will be demolished under the plans, which were first submitted almost a year ago.

Campaigner Denise Wilson said the mural has adorned the wall on the boaters-only side of the Leeds-Liverpool Canal for more than 35 years and is an important part of Leeds’s industrial heritage. She said:

“They [developers] plan to demolish where the mural is and have made no provision for the safety of the mural; presumably planning to send it to landfill with the rest of the demolition waste.

“I would like the developer to reinstate the wall on which the mural sits, repair and renovate the mural and rehang the mural.”

“As a community we have spent the last three years cleaning up the area around Oddy Locks and turning it into a destination that people want to visit.

“This will be undone if the application goes ahead in its current form and are concerned that the community’s objections to the planning department on a number of issues are being ignored.”

The petition, which has almost 470 signatures, can be viewed here.

The Grade II-listed Canal Mills building was restored in 2012 and opened as a music and creative hub. It now hosts club nights, conferences, exhibitions and is a wedding venue.

It was announced last month that popular nightclub Canal Mills, which was due to close on New Year’s Day, will now stay open for another six months.

The historic textile mill, which dates back to the 19th century, will stay open until June 2019 after negotiating a lease extension with their landlord while plans for the redevelopment are finalised.

“The vision for scheme is to provide an attractive high-quality environment that grounds the new development in its environs and responds directly to the historic features and adjacent future developments.
“The aim is to create a unique sense of place that reflects the aspiration of the buildings and public realm to be an integral part in the regeneration of this area.”