A trailblazing Armley cafe has launched an urgent appeal for help – four weeks after it closed for refurbishment.

Staff and helpers at pay-as-you-feel cafe Armley Junktion have been carrying out their own volunteer-led refurbishment at the cafe, after being turned down for numerous grants and funding.

They were half-way through the work when disaster struck and they discovered a 40 to 50-year-old fuse board and meter. An electrical inspection deemed the building unsafe to inhabit, and the cafe has been closed since. 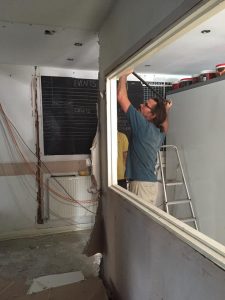 Real Junk Food Project founder Adam Smith has launched an urgent appeal to raise £5,000 to fund the electrical work and for a special flooring in the kitchen area. He said:

“In order to re-open, we need to generate funds to pay for the electrical work to commence immediately, and since we’re no longer trading we’re unable to generate these funds through our own operations.

“For us to continue to provide for and benefit the area of West Leeds and beyond, we cannot re-open and function until this work has been completed, and after four weeks of being closed we are conscious of the impact we are having on so many people’s lives who depend on us for their source of food.

“We’ve been quoted £1,100 for a week’s labour, with one day’s labour thrown in for free. The electrical equipment to carry out the work will be part donated and part bought at a cost of approximately £800.”

Mr Smith said the cafe was also in need of a new Polyflor floor for the kitchen. Its fitting will cost in the region of £2,000. He added:

“We intend on holding cooking classes, food workshops and activites with families and individuals of all ages on a pay as you feel basis. Educating the whole city of Leeds on how we handle food, how to provide for yourself and how to create healthy meals with few ingredients and at little cost.

“We intend to continue to provide outside catering through our other venues to generate these much needed funds, however, the timescale is so short to reopen that we need the whole community to help us.”

We've worked with @Armley_JunkTion for 2 years and this latest news is so sad. Please help if you can. https://t.co/GDYzKliCii #payasyoufeel

Armley Junktion #PAYF Cafe is the UK’s first ‘pay as you feel’ cafe which uses intercepted food surplus to create meals within an inclusive space.

The appeal has so far raised more than £600 in its first day.

You can donate over at crowdfunding platform Go Fund Me.

Keep up to date with progress on the refurbishment over at the Made in Armley Facebook page.