West Leeds residents are being encouraged to have their say about ambitious changes to Armley Gyratory after more public consultation events were added to the calendar.

As reported last month, Leeds City Council is consulting over major changes to the junction which are aimed at tackling queues, improving traffic flows and complementing proposals to improve the bus network between Bradford and Leeds along Armley Road. 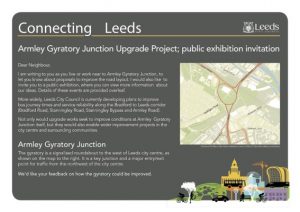 The main aim of the three proposals are to speed up traffic flow from the Ingram Distributor to the Inner Ring Road and vice versa. This involves building a new route directly across the giant roundabout at ground level.

A spokeswoman for the scheme said:

“Following events in February, we are offering further opportunities for the public to engage with us on the proposals before consultation closes on Friday 13 April 2018.

“As before, these will be drop-in events, where the public will be able to view more information about proposals for both the bus corridor and Armley Gyratory.”

People can take a look at the proposals and add their feedback at these three meetings on:

The events will also give people the chance to look at planned new bus priority measures in Stanningley and Armley as part of the city-wide ‘Connecting Leeds’ strategy.

The council has set a target of doubling the current 250,000 bus trips made in the city per day within 10 years and is wanting to hear people’s views on plans to introduce new infrastructure including bus priority measures on three key routes in the city:

• Bradford to Leeds via Stanningley, Bramley and Armley;
• Alwoodley to Leeds via Moortown and Chapel Allerton;
• and Oakwood and Roundhay to Leeds via Harehills and St James’s Hospital.

You can also have your say about both the Gyratory and bus lane proposals here.

The schemes will be funded from the £173.5m allocated to Leeds by from the Department for Transport following the collapse of the planned trolleybus scheme. There is also additional support from West Yorkshire Combined Authority and private sector stakeholders, including £71m investment from First West Yorkshire to provide at least 284 new low-emissions buses for Leeds by the end of 2020.

Yesterday, council chiefs announced additional plans for a £2.1million ‘smart signalling’ scheme to be introduced along the A65, to help speed up traffic in Kirkstall and Burley.