An Armley resident is asking the question: How do you tackle the ongoing problems with street drinking and anti-social behaviour on Town Street?

Posting on Facebook’s Armley Good Stuff page, ‘Dom Dedom’ has started a survey to see how people think the problems might be tackled. She said:

“I thought it might be an idea to gauge local opinion on what might be the best solution for this.”

What do you think the community should approach our councillors with as the best solution to solving the street drinking and anti-social behaviour problems on Armley Town Street? 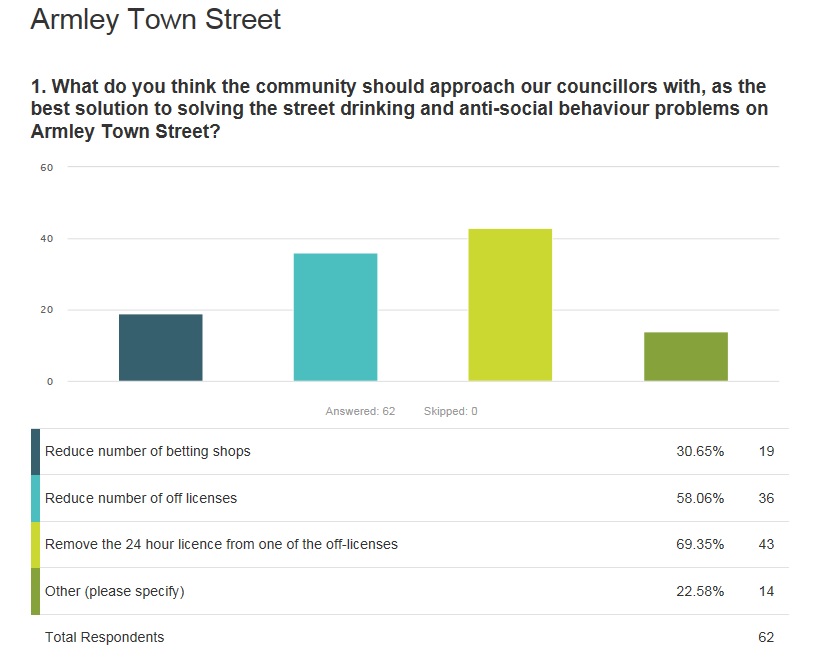 Comments under ‘other’ included:

“I feel that there should be a drinking ban in a small circle around the town street itself – I don’t think people should be stopped from having a drink in the park/rec green space as that would affect folk at picnics and having a get together with friends. Which is basically what these guys are doing – just anti-socially. I think Scarborough has one which is like a containment area?”

And another commenter added:

“In my opinion I think support from therapists and counsellors in finding the route cause of the drinking and anti-social behaviour would be the best route forward. Most other options will just displace those people to other areas.”

The questionnaire can be completed here.

Armley Town Street has been at the centre of increased police patrols, injunctions on individual street drinkers, intensive support work by Barca workers and the removal of park benches where drinkers congregated over the past 18 months.

Armley is one of 18 areas across the city which could see Public Space Protection Orders (PSPOs) introduced to help tackle the problems with street drinking.

Failure to comply with an order can result in a fixed penalty notice of £100 or a maximum fine of £1,000. More details on the consultation can be found here.