Free boat trips will take the Leeds-Liverpool Canal this weekend aboard a floating work of art called “Caddis”.

The project, called “Flotsam and Jetsam” is a response to the Boxing Day flooding, particularly how if impacted on the Kirkstall Road area.

The team, mainly made up of local residents, have been collecting stories, drawings and recollections from local people, along with data about the flooding.

This information has been etched onto tiles, which will form a covering over a special acrylic canopy for a boat operated by community boat charity, Safe Anchor Trust.

“The Leeds and Liverpool Canal celebrates the 200th anniversary of its completion this year, so this has been a special project on the canal to mark this special year and to mark a landmark event in Leeds history – the highest water levels on the River Aire ever recorded.

“That event spurred a remarkable response from local people and we wanted to find a way to record that, to say “thank you” and to get people together on boats for a convivial time.”

People can take a ride on the boat inside the artwork, which also includes patterns from data collected about the flood, such as rainfall, river levels and the number of flood warnings.

Free boat trips aboard three boats, including “Caddis” will run this weekend, from 10.30am to 4pm, at Armley Mills Leeds Industrial Museum on Saturday 2nd July and at TCV Hollybush in Kirkstall on Sunday 3rd July. 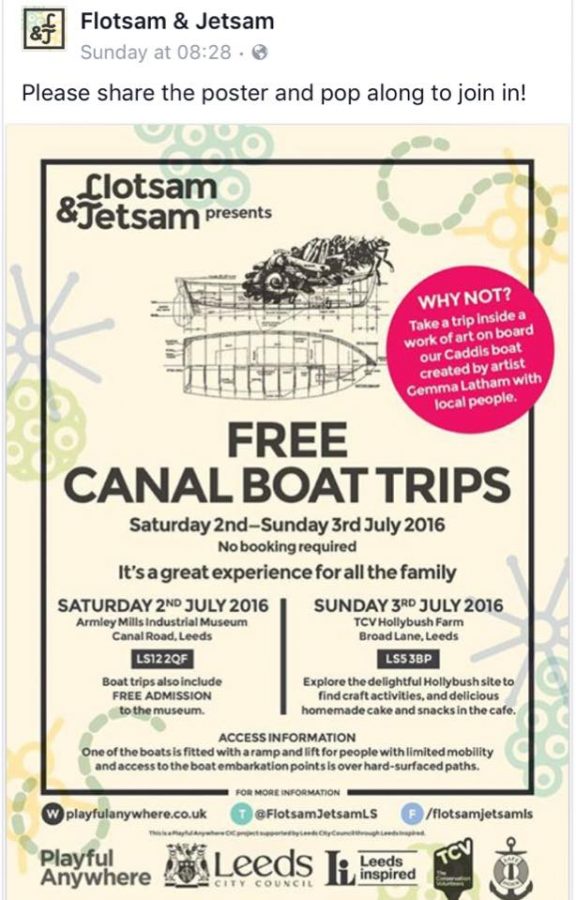 The artwork’s design takes inspirations from an underwater creature, a caddis fly.

The caddis builds a tube-shaped structure from items it finds in its local environment, to protect part of its body and the creature eventually transforms into a fly that lives on dry land.

The ideas of emerging from the water and collecting things from the local environment to make something new were insect inspirations to the team behind the “Caddis” boat.

Over a nine-day residency by two boats, more than 1,000 people will come aboard for trip on the canal – some of the trips are a “thank you” gesture for groups of people who helped with the flood clean up following the Boxing Day Floods.

The project builds upon an annual boat week in West Leeds called All Hands on Deck, which ran for four years and has taken thousand of people on trips on the Leeds and Liverpool Canal.

The project is funded by Leeds City Council via Leeds Inspired and has generous support from Safe Anchor Trust, a Kirklees-based community boat charity run entirely by volunteers. It’s a project run by by Playful Leeds CIC.