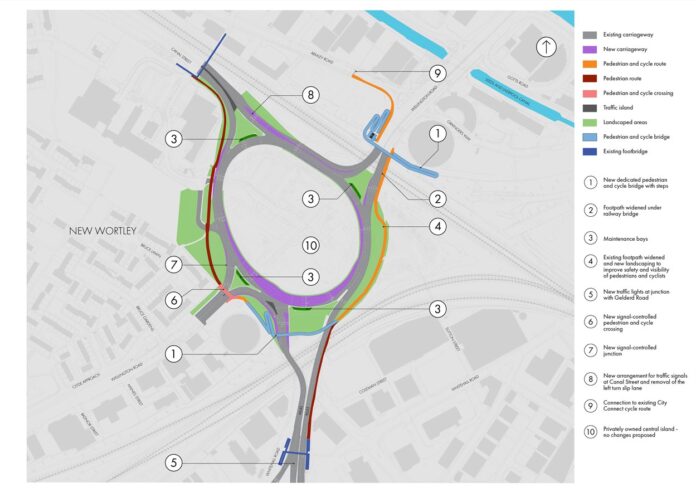 A £42m scheme to revamp one of the major routes in and out of Leeds is set to go before regional transport chiefs next month.

Plans to widen Armley Gyratory, long known as a source of traffic congestion in the city, include widening roads, replacing footbridges and introducing state-of-the-art signalling.

It also listed signal upgrades to improve traffic flow, which will be impacted by the planned closure of Leeds City Square to traffic.

The document forms part of the authority’s plans to redirect car traffic out of the city centre, to help reduce congestion. It added:

“Traffic will be encouraged to move around the city centre rather than through it. The Inner Ring Road will have the greatest volume of traffic, while a proposed city boulevard will accommodate slower moving vehicles, prioritising pedestrians and cyclists in a pleasant and safe environment.

“In order to achieve this, the vision is predicated upon the removal of through traffic from the city centre and provide additional capacity by improving the M621, Armley Gyratory on an alternative route via the inner ring road. This has been the foundation of bold regeneration momentum in Leeds.”

The plans will involve increasing capacity on A643 between the railway bridge and the gyratory, increasing from three lanes to five.

The new Canal Street stop line will increase from two to five lanes, while the A647 approach will be widened, removing the left free flow turn and providing five signal-controlled lanes.

Technology will also be used to help signals be more adaptive to traffic, and to create “virtual bus priority measures.”

This is all expected to take place by late 2022.

The demolition and the replacement of the Wellington Road and Gelderd Road footbridges is expected to take place the following year.

The report stated: “The delivery of Armley Gyratory is a fundamental component of these outputs and those under construction have been delivered on the basis that the Armley Gyratory enhancements will be delivered.

“Continued progression of this strategy is considered to be crucial to the city’s post-Covid recovery as to achieve the ambitions of the economic recovery framework.”

Members of the committee will meet on Thursday, January 6 to decide whether to allocate £27.9m to the expected total cost of £41.9m.