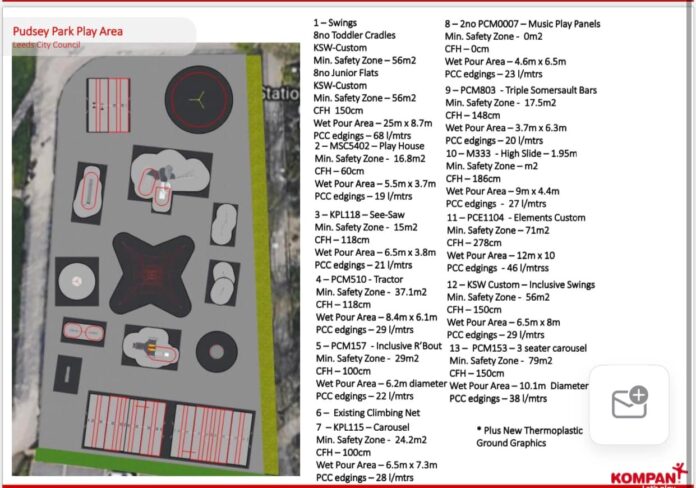 Pudsey Park’s playground is set for a £260,000 revamp, after Pudsey’s councillors revealed plans to revamp the area in time for the summer.

Plans for the historic park include doubling the number of swings, a new roundabout and a climbing tower.

The councillors helped draw up the plans alongside Leeds City Council’s parks department. All the existing equipment will be removed, with the exception of the spider web, which is still in good condition.

“We have been working really hard behind the scenes with plans for a refreshed play park in Pudsey Park but, as with everything with the council, it’s a slow process. But we now have the designs and have approved the funding.

“The final price, including installation and new fencing for the play area, will be £260,306.

“We had wanted to wait to announce this more formally but we have been inundated with e-mails and messages about the current state of the play park and wanted to keep people updated.

“We currently don’t have a start date for the work and will be pushing the council to start this as soon as possible to ensure it’s ready for the summer.”

Funding for improvements will come from section 106 funding, which are contributions paid to Leeds City Council by developers when building new homes in the Pudsey ward.

Cllr Seary told West Leeds Dispatch that the budget they had to work with was relatively small, given the high cost of play equipment, which has meant the area has been designed with practicality in mind. The new equipment will be made from metal, which is more durable than using wood.

The proposals to re-fresh the play area also include spending £17,000 on new fencing as the current fencing doesn’t meet current guidance.

Cllr Seary acknowledged the issues with a lack of public toilets in Pudsey Park since the visitor centre closed due to council budget cuts last year. He said there was a possibility of setting up an independent organisation which will have to build, run, manage and maintain new facilities, but admitted it was a ‘big’ project to implement.

The council are due to put both the former park visitor centre and disused glasshouse buildings out to tender in the next few months.

Steven Newbatt, who owns the Candied Peel Cake Company in Farsley Town Street, had said in 2020 that he hoped to set up a community hub at the centre, but ruled himself out of the running before Christmas, claiming the process was taking too long.