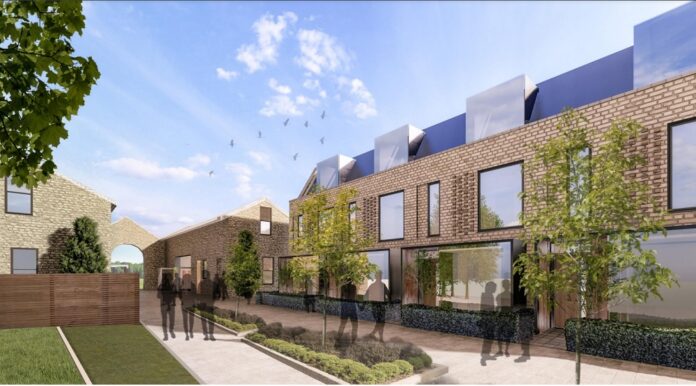 New plans to demolish run-down Cliff Cottage and build four terrace houses as part of a new £8m gated community in Wortley have been submitted this week.

As previously reported by WLD, Priestley Homes has been developing the former Cliff House mansion site, in Fawcett Lane, into flats and houses for several years.

This week, the fourth and final phase of the project was submitted, with fresh plans for four-bedroom terrace houses on the Cliff Cottage site submitted. Developers said in their application:

“The new build houses are intended to be sympathetic to the adjacent former stables and existing aesthetic to Fawcett Lane and the Western Flatts Park, the majority of which is considered ‘original’.”

The four contemporary terrace houses would include a mansard roof, projecting windows, terrace gardens and amenity space to the rear. The proposal is the fourth phase of the masterplan for the Cliff Oaks site and is integral to the viable refurbishment of the listed buildings on the site.

The four houses have been scaled back from the six originally proposed in that part of the development. The plans can be viewed in full here.

Phase three of the development, which is called Cliff Oaks, began in February this year with the transformation of the mansion’s derelict stables into four three-bedroom houses.

When completed, Cliff Oaks will comprise 25 homes in total.

Mr Cliff was well known in Leeds for his business enterprises, and he was also a councillor for the Hunslet Ward. He was influential in establishing the Upper and Lower Wortley Cemetery and Chapel in Oldfield Lane.

Between 1966 up until it closed on the 31st August 1998, Cliff House was known as Newcliffe House School, a community special school and a reform school for young male adolescents.

In March 2017, the Grade II Listed house suffered a devastating arson attack which destroyed a vast majority of the interior. Investigations revealed that five separate fires were started in the upper levels of the property.

The Grade II Listed villa, off Fawcett Lane, is one of 18 buildings or monuments in West Leeds on the council’s Heritage at Risk register.

Work on the mansion house is due to be completed next year.