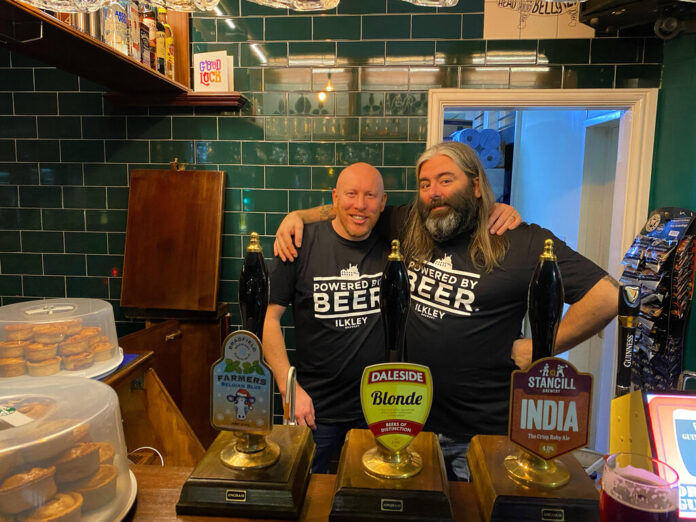 What would you be doing now if you made one of your positive Covid-times pipe dreams become reality?

Dave Knowlson has just opened Dave’s Pies and Ale house on Kirkstall Road and that’s exactly how he says it started.

With a very strong focus on keeping it simple this micro venue looks to become an established feature on one of the major routes from Leeds to the West of the city.

Currently open Wednesday to Sunday from noon to 11pm, Dave and his business partner Andy Turner have created something intriguing.

It all started with a discussion about “John Hunt’s Pie Machines”. These have been used for over 100 years, at the heart of pie manufacturing and have retained their value impressively.

After finding one in a Calverley reclamation yard at the beginning of lockdown Dave planned to refurbish it and sell it on. But friends kept suggesting other ideas for the man who loves a growler so much he has a tattoo of one under his tee-shirt.

The impact of lockdowns hit hard on his role as pub manager so he decided to use the renovated pie press just for fun, then delivered the results to friends and regulars from the Grove in Holbeck, which he has managed for the past six years. This gave a good testing team for experimenting with local ingredients.

He currently has seven core pie types, including a vegetarian option, with four types on sale most days.

Another mate, graphic designer Rob Press, created a logo and this led to prints on tee-shirts and people demanding they could buy them, then branding for the bags for the pies, thus the pie-line side hustle definitely became established.

A green theme picked up on the original green paint hidden under 60 years of “maintenance” the pie press has had. This has shaped the look of the pub.

The location is pure chance – the advert on facebook market place didn’t even say where it was, just indicated it was cheap. A Covid start-up loan and partnership with long time friend and former work colleague Andy were the next steps.

A cheeky offer price was made as the venue has been empty for nearly two years and suddenly they were in business.

Over the past three months a fit-out on a shoestring turning a former sandwich shop then gin palace into the traditional styled venue you now see.

It was a seriously thin shoestring too – from learning to tile, to a counter rescued from a Scottish barn, pub dividers from Preston, the tables from garden near Manchester and the Jim Beam barrel tops were so “fresh” the air in the van became seriously alcoholic.

The pub sits 16, and there is scope for a further table downstairs.

The outside pie deliveries have stopped as pie supply and demand is focused on the micro-pub. Plenty people drop by to collect, while others stay in. With three local beers and cider on tap, and a fridge for bottles currently featuring Ridgeside and Ilkley breweries, who wouldn’t?

Paul Whitaker had been looking forward to the opening, and said after his first visit:

“Amazing to see Dave take his lockdown hobby and turn it into a traditional old fashioned boozer in micro form but with a full sized offering and welcoming atmosphere.”

To check the day’s pie options, look on Facebook or Instagram and look forward to a friendly chat. I opted for a low-alcohol Ridgeside beer option to go with my pork pie – turning down the option to have it warm with peas but when I left a debate on how hot a “hot Chilli sauce pie” could be was rumbling…