Work has started on an £8 million redevelopment of a derelict school which was subject to an arson attack.

As reported in July, arsonists targeted the former Upper Wortley Primary School building, which had been derelict for a decade. 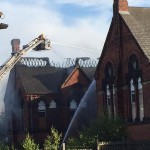 First homes on the Greenhill Fold development are expected to be occupied next Spring.

Tim Reeve, of Advent development, said in a press release he was delighted to start work on the landmark development. He added:

“We consulted closely with the local community prior to the planning application and have received a huge amount of support from the people of Wortley, who are really keen to see this building transformed back into an integral part of the community.”

Farnley and Wortley councillor David Blackburn (Green) welcomed work starting on the development. He said: “There is a huge contingent of former pupils who still live within the community and I share their delight that the school will be saved and given a new, sustainable life, creating a significant development and regenerating this pocket of the ward.”