Word Up West Leeds Festival: Get writing and get involved!

Word Up West Leeds is a festival of ‘wordsmithery’ in all its forms. It will take place in various venues in West Leeds on 10th and 11 June.  Tim Dawtry has the details…

Word Up West Leeds aims to develop and celebrate all forms of wordsmithery with a focus on the West Leeds area.

We are looking to celebrate the work of established Leeds-based writers and poets, encourage new writers and inspire wider interest in the wonder of words.

In the weeks prior to the festival we will be holding a series of workshops covering various areas of creative writing – from writing a novel to song lyrics and scriptwriting and more.

The workshops will take place in various venues across West Leeds, including:

We will be asking for submissions of creative writing by West Leeds residents to be published in a literary journal, which will be launched at the festival.

The festival itself will feature readings, workshops and performances from a range of poets, novelists, rappers, playwrights and performance artists – full details to be announced.

For more information and to get involved, contact Tim Dawtry on 07903 463776 or email tim.dawtry@newwortleycc.org.

Details of workshops below: 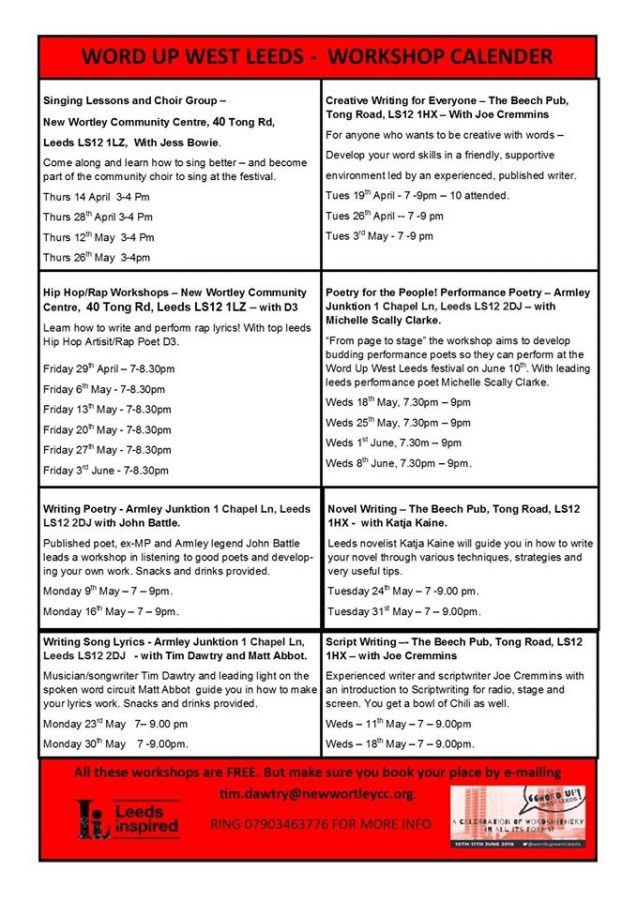 £100 prizes for best story and poem

Send us your short stories and poems for publication! £100 prizes for best short story and best poem. As part of the Word Up West Leeds Festival, we will be printing an anthology of local writing to be distributed at the Festival and at other locations in West Leeds (libraries, one stop centres, doctor’s surgeries etc).

We are looking for original stories and poems by Leeds-based writers.

Closing date is May 20, winners announced at the Word Up West Leeds Festival on 20 June.

Send your entries, on a word document, by email to tim.dawtry@newwortleycc.org.

An organising meeting for both the Word Up West Leeds and New Wortley Festivals will be held on Thursday 5 May, 1.30pm at the Beech Pub on Tong Road.