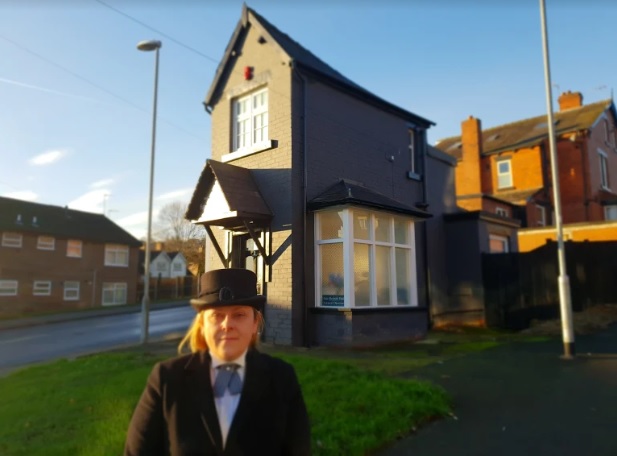 A former newsagents in Bramley has been given a new lease of life… as a funeral directors – and business owner Kate Elizabeth Field says it looks “like something from the Addams Family”, writes Neil Hudson.

And locals seem to love the fact the Victorian landmark, with its wonky roof, has been restored.

Kate, 41, from Cookridge, took on the neglected building after it closed in 2018.

Plans to turn the former Harry Binns’ newsagents into shops and flats drew a wave of objections from residents.

Now, after a year-long renovation, it has transformed into Field Funeral Services.

“I remember wanting to be a funeral director at the age of 11.

“Running my own business has always been a dream.

“My husband has done all the work. Some people say it looks like something from the Addams Family. When it closed as a newsagents, I used to drive past and think it was such a lovely, quirky building. It just needed a little TLC.”

A previous planning application submitted to Leeds City Council in June 2017 to turn the empty shop into shops, including a take-away and flats, including nine additional parking spaces, drew 19 objections from residents.

A revised application, submitted in February 2018, drew 18 objections. In refusing the application, the council noted:

“The attractive Victorian two storey building… is considered an undesignated heritage asset due to the detailing and design.”

In contrast, plans to turn the building into a funeral directors drew only support. One letter to the council read:

“Great to see a fantastic development of what was an eyesore building for so long – and that it is actually now being restored and not knocked down and turned into a retailer box. Well done Leeds for supporting this.”

Kate admits to being a tomboy as a child and after school went to Leeds Technical College to train as a mechanic. She worked as a funeral director with another firm for nine years before striking out on her own.

“I was always a tomboy growing up. I used to climb trees and jump off garage rooves when I was young.

“When I left school, I went to Leeds Technical College to train as a mechanic, which I did for a year, before moving into the office side of things. After that, I went to become a funeral director with another firm. When the chance came to start my own business, I took it.”

What does Kate’s business offer?

Kate said: “For me, it’s about offering a clear service. You meet people at the most vulnerable time, so my job is to say, I’ll take care of that so they can just breathe. All my packages have inclusive prices, which means there’s no hidden extras.”