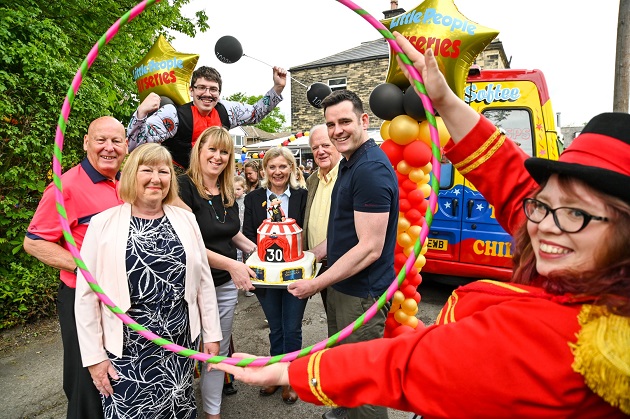 West Leeds-based Little People Nurseries celebrated 30 years in business by throwing a Greatest Showman-themed party for customers and staff past and present.

More than 300 people attended the free party at Little People Stanningley which featured face painting, inflatables and circus games alongside performances from Leeds All Stars Majorettes.

The business was founded by Marguerite Hallas in 1989 and its first site was the Stanningley nursery, where the party was held.

As the business grew, Marguerite was joined in the business by her husband Geoff, followed by their daughter Vicky and, more recently, Vicky’s husband Gary. The business now owns and manages five sites – four in Leeds (including Bramley and Farsley) and one in Heckmondwike.

Over the past three decades the family-run business has cared for over 3,000 children and trained over 200 nursery nurses.

“I’d worked in council-run nurseries but when I had my own children there was a real shortage of private nurseries in the area so I decided to start my own.

“On the first day, I was full of excitement about what I was going to do with my 12 children – painting, sand, water play, lots of stories to be read. Although the children had different needs, all they wanted was your time and attention, so that is what I gave them and we grew from there. Those principles still hold strong today.”

In 1998, Marguerite and Geoff’s daughter Vicky was on board for the launch of the after-school club for Little People’s second site, at Farsley Farfield Primary School, one of the first in the area.

She became manager at the Farsley nursery in 2001 then expanded the business to open Little People’s third site at Bramley in 2004. Further sites have followed in Alwoodley and Heckmondwike, which opened in 2016. Little People Nurseries now provides employment for 120 people and childcare for over 600 families.

“It was fantastic to celebrate 30 years of the business that my mum founded with so many children, staff and parents, old and new. Some of our first ever customers came along who are now in their thirties!

“We are grateful for the support over the past three decades from local businesses and suppliers, and members of our local communities who have helped our business to thrive. Here’s to the next 30 years.”