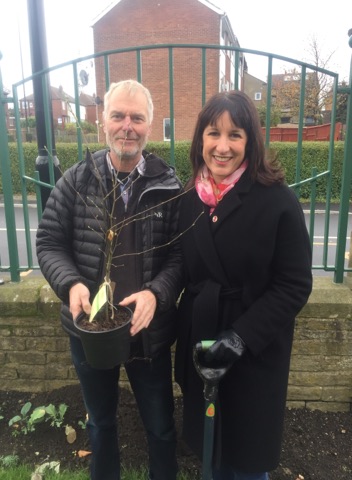 Last month, a mini forest was set up outside parliament by Extinction Rebellion (XR). 650 MPs were asked to collect a British native sapling to plant in their constituency, to serve as a reminder that climate change needs to be addressed.

Over 400 MPs took up the offer, and Rachel Reeves was one of them. The current Labour candidate for Leeds West said:

“I’m really pleased to have planted this tree in the Bramley Baths Community Garden. Climate change is an issue that affects us all, and hopefully the tree will flourish and serve as a living reminder that we all have to take care of our environment, both locally and nationally.”

He has followed the journey of the tree from parliament to its new Bramley home, and was there to help plant it. He said:

“We are really fortunate that locally we have many green spaces to enjoy. However, the UK is one of the most de-forested countries in Europe, and this tree planting project will hopefully prompt government to commit to further planting, for the benefit of the environment.”

The tree, a hornbeam, is described by the Woodland Trust as:

“Gnarled and mighty, the hornbeam is as tough as they come. It’s beautiful, useful, and it’s all round leaf cover makes it a winter haven for wildlife.”

As the hornbeam can live for over 300 years, the community and the wildlife should be reaping benefits for centuries to come.