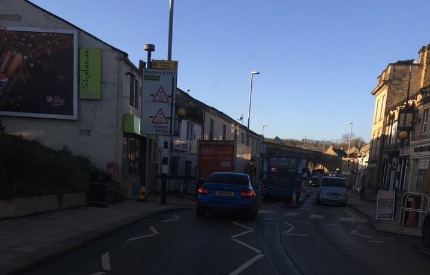 In a letter to businesses and residents, Leeds City Council highways engineer Russell Martin has announced road closures in the Bradford Road and Town Street area of Stanningley on Sunday 7th and Sunday 14th January 2018. Buses and cars face diversions.

In his letter, Mr Martin said:

“Due to inclement weather conditions we were unable to work Sunday 10th and Sunday 17th December, and therefore will need to return to site next year to complete this scheme. A road closure with signed diversion will be place between the hours of 7am and 6pm on these days.

“Pedestrian access will be available at all times and every effort will be made to maintain access to your property throughout the working period, however there will be occasions when access by vehicle is restricted. Your co-operation in ensuring your vehicle is not parked on the carriageway during the works would be appreciated.

“I would like to take this opportunity to apologise for any inconvenience and assure you that every effort will be made to keep disruption to a minimum.”

A petition with more than 2,000 names led by Phil Townend, proprietor of Philip Nicholas barbers, had been calling for improvements in the area, which is supposed to be a shared space between motorists and cyclists, following a series of near misses, minor bumps and road rage incidents.

Work, which started in November, includes textured over-run areas, together with a larger central margin in middle of the road.

Last month 87% of Dispatch readers said the improvements had so far made the traffic situation ‘worse’ in the area.