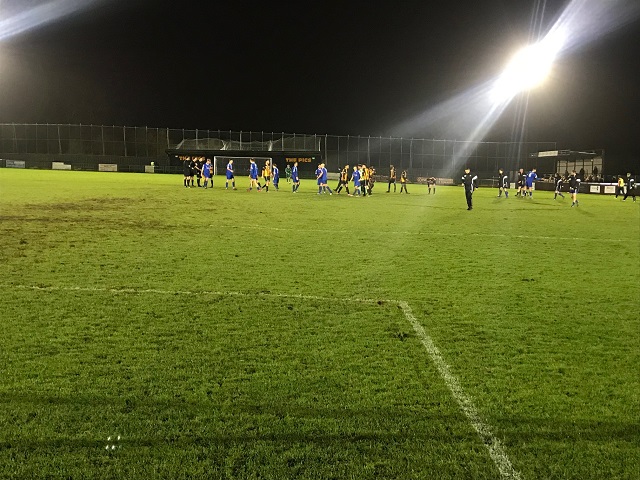 Farsley Celtic made it three games unbeaten with a hard-fought 1-1 draw away to Rushall Olympic, writes THOMAS RITCHIE.

Daniel Waldren scored a fine goal early on to give Rushall the lead, before a late error by the Pics’ goalkeeper Jahquil Hill allowed Danny Ellis to score the crucial equaliser.

Farsley came close twice early on, with Isaac Baldwin finding Dan Cockerline who had his shot fumbled behind for a corner by Jahquil Hill. From the resulting corner Danny Ellis had a shot deflected and Hill produced a stunning finger-tip save to deny the Farsley captain.

However, it was Rushall Olympic who found the breakthrough, with Daniel Waldren latching onto a loose ball and curling just inside the upright from 30-yards out.

Waldren was again involved as Rushall should have doubled their lead, his cross finding Richard Brodie who had a free header but failed to hit the target.

Farsley could have equalised on the stroke of half-time with a free-kick in an excellent position, but Dan Cockerline curled just wide, meaning the Celts have now gone five matches without a first-half goal.

The visitors came racing out of the blocks after the restart, with four excellent opportunities for Farsley inside the opening ten minutes. Danny Ellis headed Paul Walker’s cross just over, and Isaac Baldwin had a shot superbly saved by Jahquil Hill.

Dan Cockerline then became the creator, finding space before shooting wide from the edge of the box, and then just moments later he found Cartman whose attempted chip was held by Hill.

With 20 minutes remaining Rushall had a chance to secure the three points as Jordan Sangha’s free-kick found Brodie, but he headed just wide from six yards out.

Adam Lakeland then made the decision to send centre-half Danny Ellis up front and he had an effort tipped wide by Hill after being set up by Nathan Cartman.

With just minutes remaining Farsley came agonisingly close once more as Ryan Watson flicked the ball on to Ellis who let fly with a screaming volley from the edge of the box, and Hill somehow made a wonderful save and it just did not look like being Farsley’s day.

But in the final minute of normal time Jahquil Hill undid his good work as he failed to hold onto a long, hopeful ball from Kurt Harris, the ball falling kindly to Ellis who tapped home to finally get the batter of the Rushall shot-stopper.

The Celts even had a chance to win it in the sixth minute of stoppage time with a well-positioned free-kick, but Dan Cockerline failed to hit the target and both sides were forced to settle for a share of the spoils.