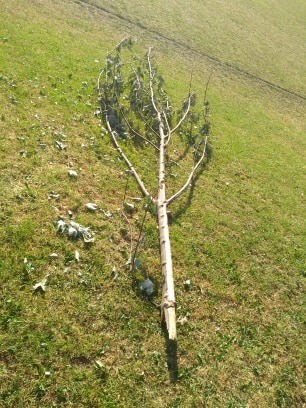 These are the images taken earlier today of dumped rubbish left on playing fields in Swinnow and damaged trees.

West Leeds Dispatch was contacted by a Swinnow dog walker, who was left upset and angry at rubbish people had left behind at Hough Top playing fields – and what seems to be vandalism to at least one tree.

It’s been a scorching weekend weather-wise, with thousands of people flooding to parks, playing fields and gardens to make the most of it.

The dog walker, who asked to remain anonymous, said:

“The rubbish people have left behind: beer cans, pop bottles, disposal BBQs – trees have been vandalised.

“As you can see for yourself it’s a mess. I am sure you will agree, what makes it worse is that the council have now opened the bins so no excuses for this.”

In recent days there have been similar reports on social media about rubbish left in Queens Park in Pudsey and Armley Park.