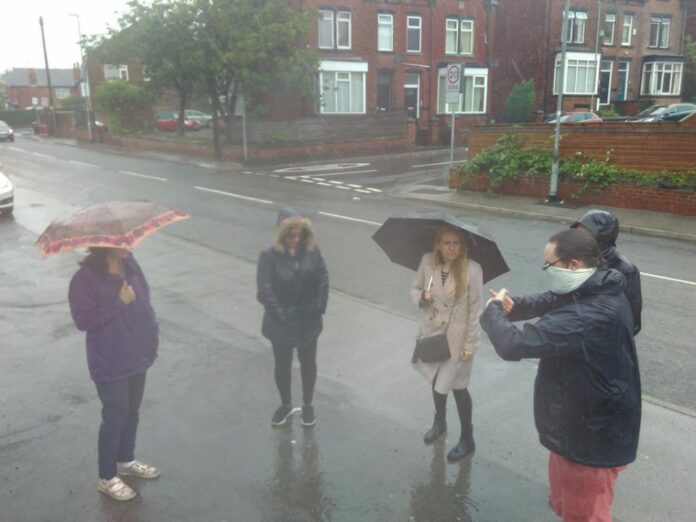 She has written to Leeds City Council’s executive member for transport, Councillor Lisa Mulherin, to press for traffic-calming measures to be installed along Raynville Road.

Her letter is supported by Armley councillors Lou Cunningham, Jim McKenna and Alice Smart and follows a visit by the Leeds West MP to the road in Armley to hear the concerns of local people and see the problems at first hand.

Ms Reeves asked residents to tell her their views about the busy road in a survey posted on her Facebook page that has received more than 150 responses since it was posted in July.

Of those who responded, almost half (48.7%) said they had been involved in a near-miss in or around Raynville Road either as a pedestrian or car driver.

A total of 121 people left additional comments with many highlighting their concerns about speeding. Two people said their pets had been run over, while another stated that a car had crashed into their shop.

There were also concerns that the residential streets around the road were used as rat runs and that children were at risk from speeding drivers. Worryingly, two respondents stated that two children have been knocked over by cars in the last six months.

With regard to a solution, the general consensus was that traffic calming measures were needed urgently on Raynville Road. The most popular suggestion was the installation of speed bumps, although many respondents were also in favour of speed cameras.

“It’s clear from my survey and talking to local people that they are really worried about the worsening issue of speeding traffic along Raynville Road.

“It is in everyone’s interests to take action to prevent serious accidents. I would urge the council to install traffic calming measures on Raynville Road as soon as possible.

“I have also been calling on the council for some time to make all residential roads in Leeds, especially those near schools and parks, 20mph zones.

“In Leeds West, many schools and parks are on roads where cars can travel at 30mph. Some roads, including Leeds Bradford Road – which goes along Bramley Falls Park – still have 40mph speed limits.

“I will continue to press the city council to consider implementing a 20mph speed limit on residential roads, especially ones near schools and parks.”