Members of the Save Pudsey Green Belt Action Group are concerned that Horsforth-based Stonebridge Homes has surveyed the land between Northwood View and Oak Dene Close, off Roker Lane in Pudsey.

It is believed the company is interested in buying the land – and residents fear they could build more than 100 homes on the site.

Concerned residents are hoping to hold a public meeting in the coming weeks to discuss any development, which they say would:

“I can’t stress enough just how upset local people are at this news. Apart from its beautiful views and being a lovely place to walk, this land is rich in all kinds of wildlife and people simply love it.”

Campaigners have circulated the following leaflet in recent days – and are considering holdng an Easter protest event. 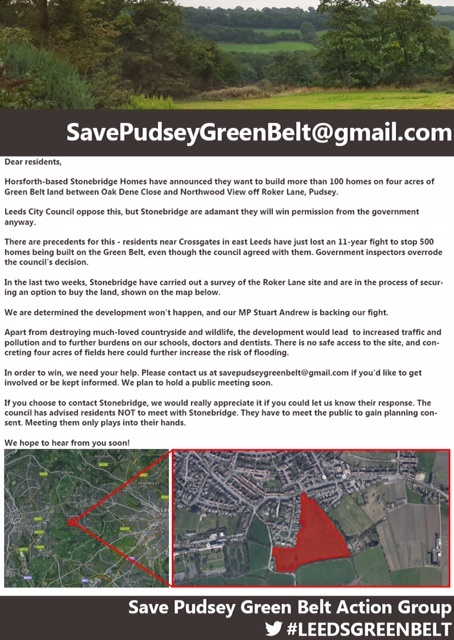 The land is not earmarked for housing in Leeds City Council’s Site Allocation Plans, which maps out areas of land to be developed over the next 15 years.

A spokesman for Stonebridge Homes said the land had been put forward for possible development. He added:

“As part of this process Stonebridge Homes, along with other developers, have received an initial approach as to whether our company would like to be considered for this development project.

“This is something that we will consider in due course, however as we do not own the land and are not part of the decision-making process as to what, if anything, happens with it, it would clearly not be appropriate for us to comment any further at this stage.

“Stonebridge Homes are a business which will always consider the views of the communities in which we build and this is something that we have always demonstrated through our many years of delivering high-quality new homes in West Yorkshire.”

Residents interested in opposing any housing on the site can email the campaign on savepudseygreenbelt@gmail.com.

Meanwhile, residents from the nearby villages of Tong and Fulneck are continuing their fight against Bradford Council’s plan to release large swathes of greenbelt land for development. Check out the Save Tong and Fulneck Valley website for more.