A carrier bag full of old letters and photos destined for the tip has been donated instead to Pudsey & District Civic Society, writes Damon Sugden. 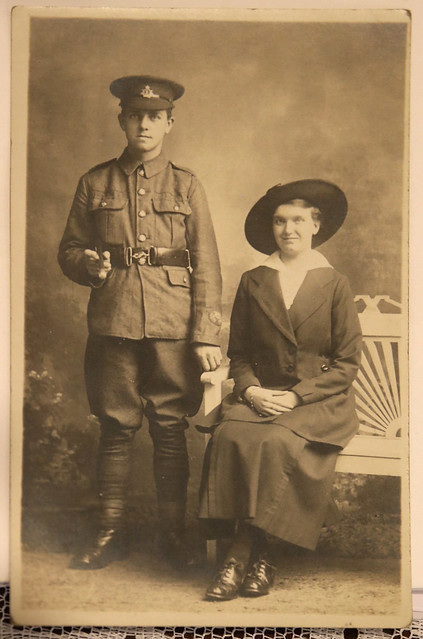 Astonished Society members realised that instead of a pile of old rubbish, it was in fact an untold and forgotten love story from World War One Pudsey.

Local historians Kelvin Merritt, Christine Throp and Damon Sugden are now piecing the story together from hundreds of letters sent from John Wilkinson to his sweetheart Hilda Margaret Smith.

Before joining the Army Cyclist Corps, John Wilkinson had lived with his parents William Waterhouse Wilkinson and Ann Wilkinson at 4 Halliday Street, Pudsey.

His girlfriend Hilda Margaret Smith lived at 3a Crimbles Terrace, Pudsey, with her parents John George Smith and Ann Smith.

Both sweethearts appear to have been only 16 years old when their correspondence started. John may have joined up under age in 1916, and the pair were in regular contact between 1916 to 1919, writing to each other as often as time and circumstance would allow.

The donated letters were from John to Hilda and describe in detail his daily routine and the interesting places that he got to travel to. He also sent photo postcards from the same places giving a valuable insight into a lost Britain.

The Civic Society researchers now face the difficult task of piecing the crumbling letters together and unraveling the full story.

Pudsey & District Civic Society invite anyone with family connections to John or Hilda to contact them on info@panddcs.com.

A full update will be made public when the historians have completed further research.