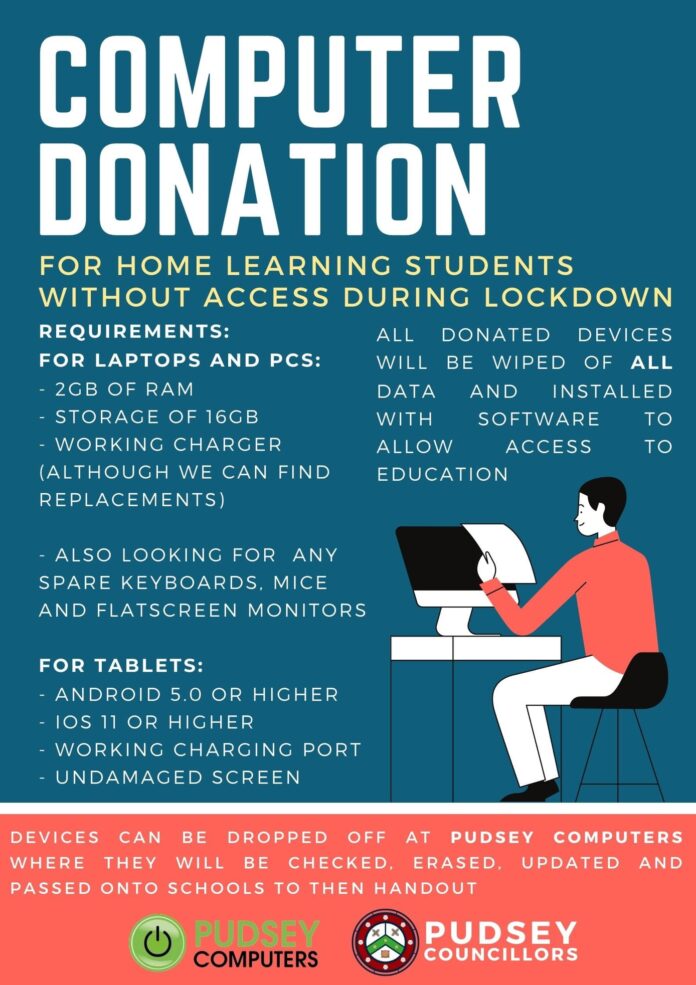 An appeal for old laptops and desktop computers has been launched in Pudsey to help students who are learning from home due to lockdown.

Pudsey Computers is asking for people to drop off their unwanted tech inside the front door of the retail store at 7 Bradford Road, Stanningley. Owner Steven Lightfoot said:

“We have started a project today in conjunction with Pudsey’s councillors to get devices out to students in the Pudsey ward – Grangefield and Crawshaw are the two big secondary schools in the area.

“Following last night’s announcement students are being asked to learn from home which is a big problem because a lot of parents are working from home as well, so those devices are taken up.

“Pudsey’s councillors have asked if possible for people to make donations of old laptops and desktops that they no longer use. We will wipe them so it’s completely safe, before passing them onto schools to distribute to pupils who need them.”

The idea for the appeal came from Pudsey councillor Simon Seary and is supported by Leeds council’s Outer West Community committee.

Cllr Seary (Conservative) said five laptops had already been donated today and would be ready for schools to distribute them to pupils in need tomorrow. He added:

“I was looking on social media late last night and people were saying if they were working from home and they had two or three children, there simply wouldn’t be enough devices for everyone.

“I approached the headteachers at both Crawshaw and Grangefield and both supported the idea of a donation appeal. Steven Lightfoot is massive in the community and was really receptive to the idea.”

If you are unable to drop your device off to Pudsey Computers Cllr Seary is urging people to get in touch and he will collect.