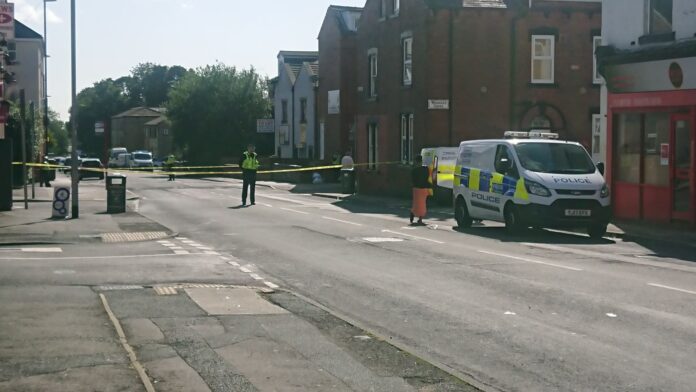 Police have launched a murder investigation following the death of a man in Armley earlier today.

Detectives believe the man had been assaulted by a group of youths in Whingate Avenue, Armley.

The victim, a man in his forties, was treated by paramedics at around 4.10am this morning but was pronounced dead at the scene a short time later.

A large scene is currently in place around Whingate Avenue to undergo forensic examination and specialist searches.

“We are treating this man’s death as murder and are carrying out extensive enquiries to establish the full circumstances and identify those responsible.

“Our enquiries are at a very early stage and we are very keen to hear from anyone who witnessed the incident or saw the group of youths involved in the area or who has any information that could assist the investigation.

“Officers will be remaining at the scene throughout the day and we are liaising with our colleagues on the local neighbourhood policing team who are working to reassure the community who will be understandably concerned as a result of this incident.”

Anyone with information is asked to contact the Homicide and Major Enquiry Team via 101 quoting crime reference 13200418973 or online via www.westyorkshire.police.uk/101livechat.

Information can also be given anonymously to the independent charity Crimestoppers on 0800 555 111.

UPDATE FROM ONE OF OUR COMMUNITY REPORTERS:

Whingate Avenue has been completely cordoned off whilst Town Street and other
nearby roads have been closed during the initial investigation. At least three police cars and six officers were at the scene of the crime.

Forensic examination of the scene has begun.

This is the latest incident – believed to be a stabbing -to have occurred in the Whingates area in as many months. The first on 14th May and the second on 1 August.