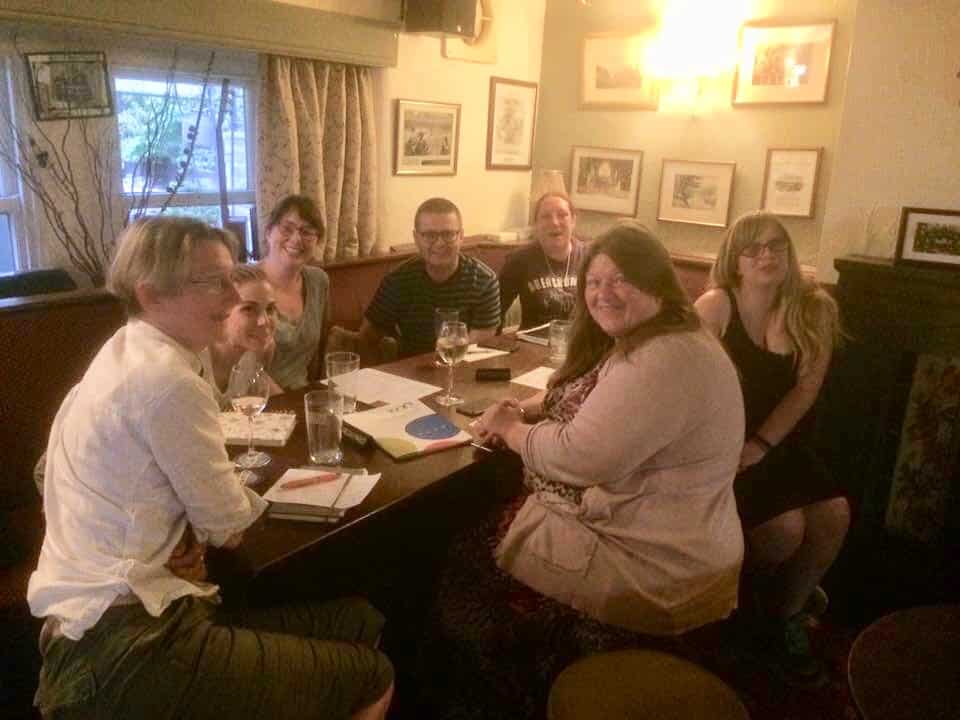 That day I was in the unlikely setting of the awe-inspiring British Library near St Pancras Station in London for an ‘unconference’ about community news websites.

The event was run by a wonderful organisation called Talk About Local, which was encouraging people to set up their own news sites or blogs as mainstream press slowly withdrew from communities due to staffing cuts.

Surprisingly I bumped into an old friend who was living in Armley at the time, Emma Bearman. Emma had travelled to London and was interested in setting up a platform to give people in West Leeds more of a voice and greater understanding of what was happening in their community.

Two West Leeds residents huddled together in a quiet booth in London to plot the possibility of setting something up and the rest, as they say, is history.

Today I’m writing our 4,000th article since we started in May 2015 (for the first few months we were known as West Leeds Life until we changed to Dispatch in August that year).

It’s been a rollercoaster ride. We’re run entirely by volunteers who ‘do’ West Leeds Dispatch in what we laughingly call our spare time and between family and work commitments, so we’re often pressed for time or writing articles at some unholy hour (it’s currently 1.56am as I type).

It’s tiring and sometimes hard work and it takes a lot to keep going.

But all our volunteers have the same passion for their communities. They love to tell the success stories of unsung heroes/heroines, increase awareness of the brilliant local groups and organisations who do so much and hold the powerful to account and give our communities a voice on important issues.

This year alone we’ve shone a light on the Kirkstall flood defences saga, the campaign to save the TV Harrison ground in Wortley, the efforts to improve Armley Town Street, concerns about road safety and traffic congestion and the need for better public transport.

We’ve also featured (and supported) the campaign to take the former Barley Mow pub in Bramley into community ownership. We’re keeping an eye on major planning applications, such as the Kirkstall District Centre housing plans by Artisan.

We’re also the founding member of the national Independent Community News Network, and a member of independent press regulator Impress and their publishers taskforce to build on recommendations made by the Cairncross Review to help sustain the UK news industry in the digital age.

In early 2017 we became a social enterprise as we’d become a victim of our own success – we simply weren’t (and still aren’t) sustainable enough to be able to keep growing at the rate we are.

We have a nine-strong board made up of people who live in West Leeds and who work locally. We meet monthly who essentially map out the strategy for WLD going forward to see how we can raise funds and get more people contributing and helping us.

Get involved with us!

Our AGM is on September 2, feel free to join us and help shape our future (and there will be food!) – reserve your free ticket here.

People also volunteer by writing regular columns for us, or by contributing articles. Contributions from all members of the community are always welcome!

We recently ran a couple of six-week community reporter training courses in Bramley and Armley for residents to help boost their confidence to contribute to The Dispatch. Check out all their marvellous articles here.

We’ve got new community reporters courses coming up. They’re free and places are available, so do sign up! The first is a morning course at New Wortley Community Centre every Wednesday from September 4 (10am-noon) for six weeks. Book here.

And the second runs at Kirkstall Valley Development Trust’s new base in Kirkstall Bridge Shopping Centre every Wednesday from September 11 (6.30pm-7.30pm) for six weeks. More details and bookings here.

You can also join us for our our latest fun, friendly and relaxed West Leeds Dispatch Community Quiz Night on Wednesday, August 21st at The Abbey Inn off Pollard Lane. There will be prizes! And food!

Entry is just £1 per person. All monies raised will help us to continue to fund community journalism in West Leeds. 8pm quiz start.

We want to continue to maintain our openness and protect our precious independence – and above all to connect people with what’s happening in their part of West Leeds. Every reader donation, big or small, helps us to do that.

The free online commodity called ‘news’ takes time, effort and expertise to deliver. We believe our work has massive value to society.

That’s why we’re asking people to contribute just £4 a month (the equivalent of £1 a week),  to help keep us going and – crucially – expand our offer.

More details on how you support us financially are available here.

Thank you to everyone who has ever read an article, contributed an article, donated, sat on our board or attended one of our events – we couldn’t do it without you.