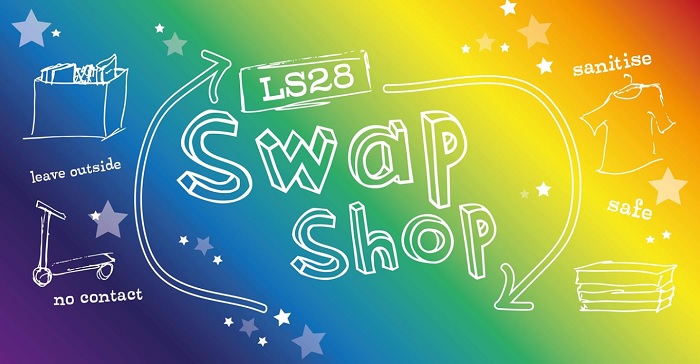 A Facebook swap group where you can get anything from a sofa to a kid’s DVD for the price of chocolate has been providing a lifeline during lockdown.

The LS28 Swap Shop was set up by mum June Sinclair-Parker at the end of March.

The aim was to provide a group where people could access things they might need but couldn’t get due to lockdown.

People could swap their unwanted stuff for treats like chocolate, sanitise them and drop them off while doing their daily exercise and social distancing.

The group, which is thriving with dozens of posts each day, covers Pudsey, Farsley, and Calverley. Ms Sinclair-Parker said:

“I wanted to teach my 10-year-old a new skill when the lockdown started. I tried everywhere but the crochet needles I found would take a month to get to me. I had lots of wool so asked on my private Facebook if anyone would swap. Wool for a needle. No-one had one.

“So I thought I’d ask Pudsey Born and Bred group if I was to start a group to swap would anyone be interested. I had a few initial negative comments but as I own a salon in Pudsey I know about cross contamination etc.

“So I set it up, adding friends at first. As we were all initially worried about leaving the house for exercise so I asked that people collect and drop off items when they go for a walk. I knew having something to go out for and, in a way, look forward to would help.”

The group, which has more than 900 members, has become well-known locally as people can make their swap with chocolate or other treats. Ms Sinclair-Parker added:

“The choccy swap came by chance there were a lot of people asking for things and not giving. I then posted “offer, even if it’s chocolate ” – and that was it. Everyone has run with it and evolved!

“I have a few admin who monitor the content of the page and a few ‘MI5 type’ people who also keep an eye on it, but as I’ve learned people will find admin and block. So my spies keep me informed.”

LS28 Swap Shop rules include no offering of money, state in your post if you can’t get out, be safe and use all precautions when dropping items off and – above all – be kind.

The group can be found here.